The serious leisure perspective is a theoretic framework that synthesizes three main forms of leisure, showing at once, their distinctive features, similarities, and interrelationships. These three forms are serious and casual leisure, and project-based leisure. The latter will be described below. As the typological map below shows, each form is also a conceptual umbrella for a variety of types of related activities.

The term was coined by Robert A. Stebbins in his book Serious Leisure (Stebbins, 2007a). This book offers a detailed look at the concept. Additionally a website called “The Serious Leisure Perspective,” launched in April 2006 by Stebbins and Jenna Hartel, serves to introduce the serious leisure erspective, an inventory new publications, and a bibliography and list of researchers. The site also provides an extensive digital library on serious, casual, and project-based leisure, sections on Resources and Links, as well as a short history of the Perspective.

That the perspective takes its name from the serious leisure form should in no way suggest that it be viewed as the most important or superior of the three. Rather the perspective is so titled entirely because it got started in the study of serious leisure, Such leisure is, strictly from the standpoint of intellectual invention, the godfather of the other two. Furthermore serious leisure has often been the point of departure for analyses of casual and project-based leisure, in that the first offers a comparative backdrop for the other two. So naming the perspective after serious leisure facilitates intellectual recognition; it keeps the idea in familiar territory for all concerned. Theory and data comprising and supporting the ideas in the Perspective have been summarized and synthesized in three publications (Stebbins 1992; 2001; 2007a).

Project-based leisure (Stebbins, 2005) is the third form of leisure activity and the one most recently added to the Perspective. It is a short-term, reasonably complicated, one-off or occasional, though infrequent, creative undertaking carried out in free time, or time free of disagreeable obligation. Such leisure requires considerable planning, effort, and sometimes skill or knowledge, but is for all that neither serious leisure nor intended to develop into such. Examples include surprise birthday parties, elaborate preparations for a major holiday, and volunteering for sports events and arts festivals. Though only a rudimentary social world springs up around the project, it does, in its own particular way, bring together friends, neighbors, or relatives (e.g., through a genealogical project or Christmas celebrations), or draw the individual participant into an organizational milieu (e.g., through volunteering for a sports event or major convention). In other words leisure projects tend to be social, though not invariably so. For example a man might assemble a home entertainment center strictly for his own use; a woman might write her personal biography to give meaning to her life in the present.

As noted in the definition just presented project-based leisure is not all the same. Whereas systematic exploration may reveal others, two types are evident at this time: one-shot projects and occasional projects. In one-shot projects people generally use the talents and knowledge they have at hand, even though for some projects they might seek beforehand certain instructions. This could include reading a book or taking a short course. And some projects may require a modicum of preliminary conditioning. Always, the goal is to undertake successfully the one-off project and nothing more, and sometimes a small amount of background preparation is necessary for this. It is possible that a survey would show that most project-based leisure is hobbyist in character, while its next most common type would probably be a distinctive kind of volunteering.

As for occasional projects preliminary observation suggests that they are more likely than their one-off cousins to be born in or motivated by an agreeable obligation. Examples of occasional projects include the sum of the culinary, decorative, or other creative activities undertaken, for example, at home or at work for a religious occasion or someone’s birthday. Likewise, national holidays and similar celebrations sometimes inspire individuals to mount occasional projects consisting of an ensemble of inventive elements.

Because the concept of project-based leisure is of such recent origin, only a handful of studies have at this time been mounted in its name (see Bibliography in the Serious Leisure Perspective website listed in Resources in this article).

A map of the serious leisure perspective

The research findings and theoretic developments over the years have evolved and coalesced into a typological map of the world of leisure. That is, so far as is presently known, all leisure (at least in Western society) can be classified according to one of the three forms and their several types and subtypes. More precisely the serious leisure perspective offers a classification and explanation of all leisure activities and experiences, as these two are framed in the social psychological, social, cultural, and historical conditions in which each activity and accompanying experience take place. The figure below portrays the typological structure of the Perspective. 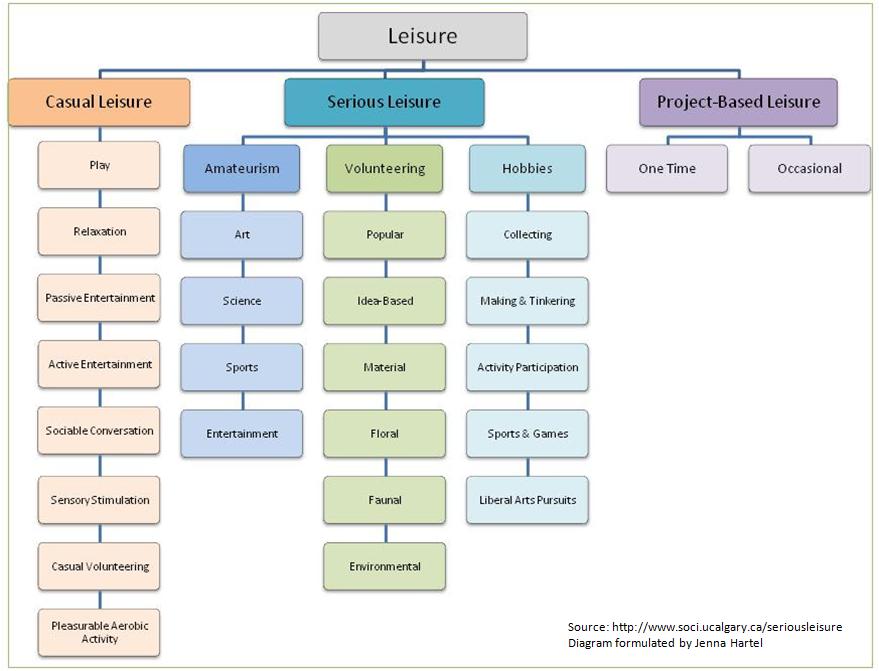 Will this map change in the coming years? Most probably it will, although it is difficult to say at this time just how. The first list of casual leisure types included only the first six. The liberal arts hobbies were added long after the first four were introduced. The volunteering typology was published in 2007 (see Stebbins, 2007b) and the conceptual statement on project-based leisure appeared in 2005. Thus is it good to view this map as open to change, as we learn more and more about the vast world of leisure and as that world evolves today within one of the most protean eras in history.