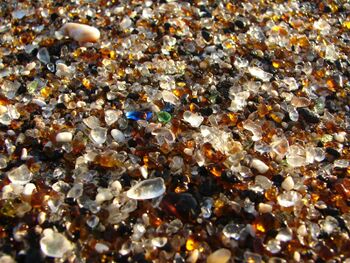 Sea glass is formed when broken pieces of glass from bottles, tableware, and other items that have been lost or discarded are worn and rounded by tumbling in the waves along the shore of oceans and large lakes. The most common varieties are green, brown or clear, while other colors, such as orange, red, yellow, cobalt blue, purple, turquoise, and black are much more rare in genuine sea glass.[1] Genuine sea glass often shows signs of "hydration", a process by which the soda and lime in the glass are slowly leached out through constant contact with water, and may be easily distinguished from artificially tumbled glass by a trained eye. Sea glass has become more rare in recent decades as a result of stricter laws against littering, but may still be found along the shores of oceans and lakes world-wide.

Sea glass attains its beauty and value from a long process of constant contact with water and extensive tumbling among debris on the ocean or lake floor. This process begins with the loss or disposal of objects made of glass in the water. The most common sources are bottles, but anything made of glass might eventually become sea glass. As objects are tumbled about by the movement of the water, they break up and start to lose their sharp edges as they roll among rocks, shells, and other debris.

If they remain loose, many pieces will eventually become rounded and may even become marble shaped. Other pieces that become lodged in one spot or partially buried will take on other shapes as a result of the uneven wear that they experience; often they will be triangular in shape.

As they roll in the waves and currents, constant contact with water will begin to leach out the soda and lime in the glass in a process called "hydration". This leaves the glass with a frosty surface and uneven pitting as the lime and soda are pulled toward the surface. This process requires long exposure to the water (on the scale of decades for the greatest effect) and is most effective in saltwater environments.

Glass that has been artificially frosted or tumbled is often called "craft glass". There are several methods to create craft glass, but none are able to perfectly recreate the distinctive characteristics of pieces that have been formed by rolling in the waves along a beach. The most common methods for creating craft glass are to place bits of broken glass in a rock tumbler and to soak them in an acid bath.

Rock tumblers quickly wear down the sharp edges of the glass and leave it looking as though it has been rolling among debris. To an unpracticed eye, this may be enough to make it appear as though it has spent time rolling in the waves, but several characteristics will give it away as artificially created sea glass. First, most rock tumblers contain uniform grit, unlike what one would expect to find on most beaches of the world; this leaves the abrasions on the glass very uniform as well, so it may be quickly distinguished from "real" sea glass, which appears more pock-marked. Tumblers often leave pieces with rough edges as well, and are unable to imitate the process of hydration.

To mimic hydration, some producers bathe their glass in an acid bath in order to etch it. This gives the glass a texture similar to what one finds in naturally made sea glass, but it leaves the craft glass much more uniform in appearance than true sea glass, which is marked by irregular "C" shaped patterns on the surface as a result of hydration. The webpage for the North American Sea Glass Association warns that improperly washed acid treated glass can be dangerous because of residue that remains on the glass.[1]

When purchasing sea glass, craft glass can often be recognized by very uniform color or wear across many or all of the pieces in a batch and by price. Colors that are rare among pieces that are found on the beach are easily mass produced in a factory and commonly sell for much cheaper than what one would expect to pay for a similar quantity of true sea glass.[1]

Sea glass collecting has become a popular hobby for people all over the world. Its popularity even supports a handful of professional "sea glass hunters" who sell their finds to collectors and jewelry makers.

Sea glass is often considered a type of gem and it is used in crafts ranging from jewelry making to stained glass windows. Value is influenced by a combination of color, wear, hydration, and thickness. Prices have gone up as real sea glass has become rarer and its popularity has increased. Craft glass is much cheaper and widely available in most colors.