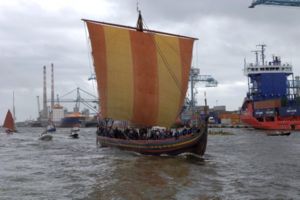 The Sea Stallion, fully titled the Sea Stallion of Glendalough, is a modern-day authentic reconstruction of a 30-metre Viking longship. She is modelled on a wreck, the Skuldelev 2, recovered from Roskilde Fjord in Denmark.

The original ship was constructed by Viking settlers in Ireland, around the year 1042, using oak wood from Glendalough in County Wicklow. The ship, along with 4 others, was scuttled some 30 years later in Roskilde Fjord in order to prevent access to the fjord by enemies. The wrecks were discovered in 1962. The Skuldelev 2 is now housed in the Viking Ship Musueum.

A marine archaeology project to build Skuldelev 2's replica, the Sea Stallion of Glendalough, was initiated by the museum. Using authentic materials and building methods, with replica tools, the ship was built between 2000 and 2004. The reconstruction project and its associated voyage aimed to shed light on the logistics of Viking shipbuilding, sailing and society.

A crew of 65 Danish and Irish volunteers sailed the ship from Denmark to Ireland. It departed from Roskilde on 1st July, 2007, and arrived in Ireland safely, sailing up the River Liffey in Dublin on 14th August, 2007. Their course took them across the North Sea, where they faced force 9 gales and had to be towed for a time, down past Scotland, and through the Irish Sea to Dublin.

The Sea Stallion was housed on land, at Collins Barracks, until summer 2008, when it was refloated and made the return voyage to Denmark. 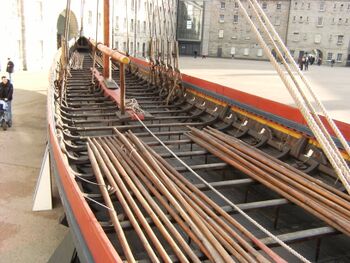