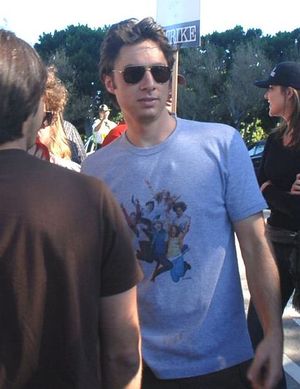 Scrubs is a long-running American comedy show notable for its fast-paced slapstick humor and surrealism and where "humor and tragedy can merge paths at any time."[1] The fictional teaching hospital of Sacred Heart is "crammed full of unpredictable staffers and patients."[1] The show is presented as the daydreams of the lead character, "fresh-faced medical resident" J.D.,[1] although the central character has shifted in the ninth season to the character named Lucy Bennett. The show achieved syndication status in 2006, and has won numerous Emmy and People's Choice awards. It is produced by Bill Lawrence, creator of the TV show Spin City. The term scrubs is used professionally in medicine to designate a medical intern.

Filming is done with a single-camera setup instead of using multiple cameras which typify most situation comedies. Cinematographer John Inwood uses an Aaton XTR prod Super 16 camera.[2][3] The first seven seasons of the show were filmed in standard definition format, but the show switched to high definition format after switching to ABC. By one count, Scrubs received 17 Emmy nominations in numerous categories by March 2010.[4][1]

Scrubs developed the innovative format by using the unique viewpoint of main character J.D. with narration, complete with daydreams and improvisation, on top of a format of multiple story lines. The producer explained: "What we decided was ... we're going to do everything through J.D.'s eyes. It opened up a visual medium that those of us as comedy writers were not used to."[5] The end of the episode features a sequence of shots showing how the show affected each character. Each show has a complete script but actors are encouraged to improvise during each half hour show. The show was upgraded to high-definition (HD) for its eighth season, and there has been speculation that the show is nearing the end of its run, although there have been efforts to keep the comedy going by injecting new cast members in a sort of "revolving door" approach.[6] Reportedly the show has filmed the "last episode" but it's possible the show may keep going. Lawrence said the final episode reveals the name of the janitor (Neil Flynn), and said in 2008: