A screenplay is a written guide which instructs actors and directors on the basics of how to produce a particular multimedia presentation such as a film or television show. It is also known as a script, and it outlines from beginning to end the sights and sounds and props and scenes in proper order to enable a director, working with actors and cinematographers, to follow the story and shoot a film.[1] It's the heart of a movie. It reveals what future viewers will see and hear when they watch the film later. It is not an artistic end product in the same way that a painting or sculpture is, but is rather an intermediate step which allows collaborators to create a film which can be interpreted in numerous ways before an end result (the film) is made.

Screenwriters can create a new screenplay from scratch or from a book or play which is called an adaptation. Since the medium is collaborative, fixed conventions dominate the written format of the screenplay. In addition, standard formats have the effect of causing each written page of the screenplay to translate into a minute of shooting time––so a director or producer reading a screenplay in standard format will know, for example, that a 100 page screenplay will probably last about 100 minutes when the film is finally made, and this helps moviemakers plan accordingly.

The format conventions are specific, sometimes varying from country to country, and can be a difficult to follow without the proper screenwriting software. Software brings numerous advantages to writing: it helps a writer keep track of character names so they don't change slightly from scene to scene (which can confuse readers). For example, if a character is named Elaine Robinson but is sometimes referred to as Elaine and sometimes as Ms. Robinson, it can confuse filmmakers; software can help keep a character's name consistent throughout. In addition, it can help properly format such matters as the dialogue, scene instructions, and pagination.[2] Top software can handle such aspects such as revisions, scene headings, transitions, industry conventions, and can include helpful extras such as a thesaurus, spell-checker, and templates for jotting down scene notes and ideas.

If the screenplay is in the early stages, it may be called a spec script or draft in which technical directions are minimal and many of the rules are somewhat more relaxed. Many screenplays are written in the hope of being turned into a movie at some later point, although the chances of a particular screenplay being bought are remote in most cases unless the writer is a professional with a well-established reputation. One way for a screenwriter to get attention for a particular screenplay is to enter it in legitimate competitions such as Scriptapalooza which charge an entry fee for each script submitted electronically. There are false "screenplay competitions" which are not serious efforts to find talented works but rather fronts to advertise products. Fees paid to legitimate screenwriting competitions go towards paying prizes to the winners as well as subsidize the costs of the competition. With luck, an exceptional screenplay, submitted in a competition, may catch the attention of a producer or director or actor who may take steps to buy it or explore developing it further into a movie. If a project is underway, directors will often work on a script to the point where it becomes a shooting script with numbered scenes and technical directions such as camera angles specifying viewpoints. In almost all cases, additional screenwriters are called in to perfect the script as much as possible before filming, since changes made at this stage are easy to fix. If a screenplay is flawed or poorly written, it is almost impossible for a talented director and actors to make it into a competent movie. At the same time, an exceptional screenplay can still turn into a sour or poorly made movie since numerous variables, including imponderables such as possible reactions by moviegoers, can affect a project's ultimate success. Indeed, it is not clear whether a film will be successful financially until it is released in theaters or on DVD. 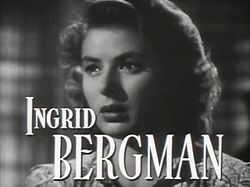 Formatting conventions include having character names in UPPERCASE letters. Dialog is indented. "Int" is short for interior; "Ext" indicates an outdoor shot which can be affected by weather (and may be more expensive to make). When a character is first introduced in a description, the name is capitalized the very first time to alert filmmakers that it's the character's first appearance in the screenplay; afterwards, the name is spelled with lowercase letters when it appears in descriptions. Accordingly, the name SAM GILL is capitalized initially but becomes "Sam" throughout the rest of the script. Fairly rigid rules guide such matters as indentation and screenplays which violate these conventions can appear amateurish and unprofessional. It matters what font is used, since a slimmer font can alter the balance between one-page and one-minute; 12-point Courier typeface is an accepted industry standard. Dialogue such as "Great reunion weekend, huh?" is indented a fixed number of spaces from the left margin.

Generally, film scripts are written in present tense and try to capture what the film-goer will ultimately see as it flashes by on the screen. The idea is to enable a reader of the screenplay to mentally imagine it happening as if they were in a theater; readers shouldn't have to slog through extensive or overly detailed descriptions but quickly grasp what a movie idea is about. The reader should "see" the story's flow, according to one guide, who advises "Keep your prose non-technical, brief, and essential to what will be seen and used on screen."[4]

The general rule for screenwriters is to write what the moviegoer will see and hear. It's difficult to indicate visually what a character is thinking, unlike a novel which can be written in third person.

Elements of a successful screenplay include a compelling story, perplexing and multi-faceted characters, novel settings and well-written dialogue. The philosopher Aristotle suggested that a Greek tragedy was well-written if it was difficult or impossible to remove a single line of dialogue without lessening the plot and storyline. The lead character or hero is often called the protagonist and the character thwarting his or her designs is called the antagonist, and characters often undergo what is called a character arc in which his or her character changes (or is changed by) events in the film.

Screenplays can fall under different genres such as thrillers, romantic comedies, westerns, film noir, science-fiction, epic, and so forth.