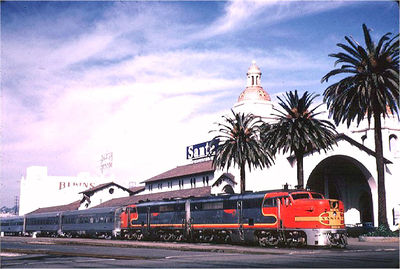 (PD) Photo: Unknown
The San Diegan, led by a pair of back-to-back ALCO PA units, reaches the end of the line at San Diego's Union Station on October 26, 1963. The facility, constructed in the Mission Revival Style in support of the Panama-California Exposition, officially opened on March 18, 1915.

© Image: Atchison, Topeka and Santa Fe Railway
"Drumhead" logo signs such as these often adorned the ends of observation cars on the San Diegan.

The San Diegan was one of the named passenger trains of the Atchison, Topeka and Santa Fe Railway (AT&SF). A true "workhorse" of the railroad, its 126-mile (203-kilometer) route ran from Los Angeles, California south to San Diego. Inaugurated on March 27, 1938, it was assigned train Nos. 70–79 (Nos. 80–83 were added in 1952 when Budd Rail Diesel Car [RDCs] began operating on the line). The Los Angeles-San Diego corridor (popularly known as the "Surf Line" — officially, the Fourth District of the Los Angeles Division) was to the Santa Fe as the New York–Philadelphia corridor was to the Pennsylvania Railroad. Daily traffic could reach a density of ten trains (each way) during the summer months. The first San Diegan ran on March 27, 1938 as one set of equipment making two round trips each way.

A second trainset delivered in 1941 made possible four streamlined trains each way. Soon thereafter, an additional third set of heavyweight equipment made a fifth trip in each direction possible. During and after the Second World War, furlough business from San Diego's military bases necessitated extra (albeit heavyweight) sections of San Diegans, and racetrack specials during horse racing season at Del Mar added to passenger train miles. Amtrak continued to operate the San Diegan when it took over operation of the nation's passenger service on May 1, 1971, ultimately retiring the name on June 1, 2001. Today the route of the San Diegan (the second busiest rail line in the United States) is served by Amtrak's Pacific Surfliner. 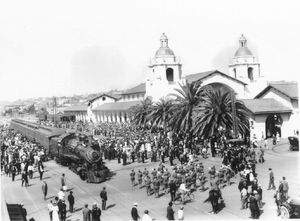 (PD) Photo: Pacific Southwest Railway Museum Association
Santa Fe No. 1247 leads a special train into downtown to celebrate the dedication of the new depot in March, 1915.

© Photo: LIFE Magazine
An experimental Hill pendulum-suspension (articulated) passenger car undergoes testing on Santa Fe's "Surf Line" trackage near Escondido Junction in early 1940.[1] The operating rules in effect at the time required that markers be mounted on the rear of the car. 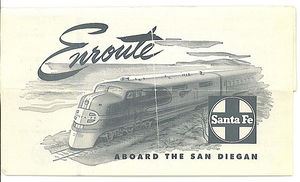 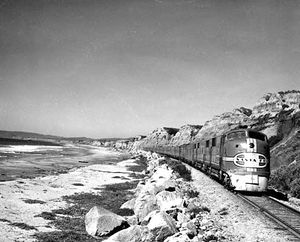 (PD) Photo: Unknown
The San Diegan, powered by a pair of EMD E1 locomotives, rolls south along the Pacific Coast through San Clemente. 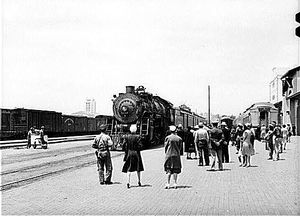 (PD) Photo: U.S. Farm Security Administration / Russell Lee
The station platform at San Diego in the early days of World War II. The Valley Flyer, filling in as train No. 70, the San Diegan, is at the right. The local train from Los Angeles is just pulling in with No. 3749 on the head end. 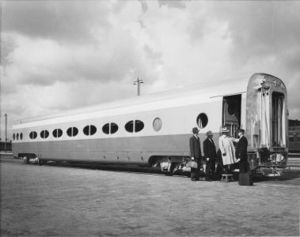 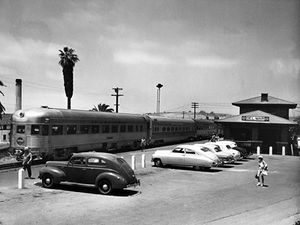 © Photo: Del Mar Historical Society
The northbound San Diegan passes through the coastal town of Del Mar, California in 1950. Visible at the end of the train is a Budd-built tavern-observation car (bearing the line's "drumhead" logo sign) along with the railroad's single pendulum-suspension coach. 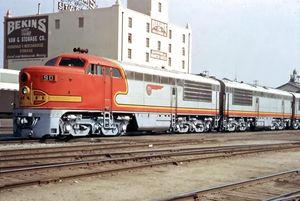 © Photo: Clint Chamberlin
The lone A-B-A set of Erie-built locomotives built in May, 1947 for the Atchison, Topeka and Santa Fe Railway hauled a number of consists including those on the San Diegan. 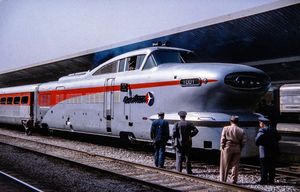 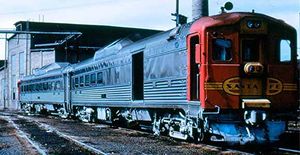 (CC) Photo: Fred Klein / TrainWeb.com
Santa Fe's rebuilt RDCs emerge fresh from the shops in 1956. As part of the repairs the lead unit has been modified to accommodate a larger baggage area, in effect converting the car from a Model RDC-1 to a Model RDC-2. 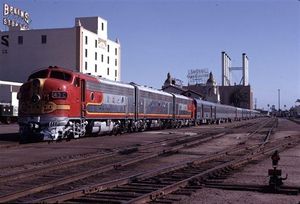 (CC) Photo: Drew Jacksich
A trio of EMD F7 locomotives, headed up by #43C, prepare to lead the northbound San Diegan out of the downtown depot in April of 1968. Baggage cars were still part of the typical Santa Fe passenger train consist on the "Surf Line." 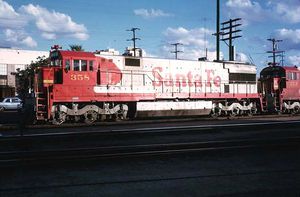 (CC) Photo: Chuck Isaac / TrainWeb.com
Santa Fe #358, a GE U28CG, along with its companion unit #353, makes a rare appearance at the head of the northbound San Diegan in 1968. Both sport a modified Warbonnet paint scheme.

Motive power consisted of a single 1,800 hp EMD E1A locomotive sporting the Santa Fe's familiar Warbonnet paint scheme. These units would, in time, be replaced by ALCO PA and PB power, EMD F3, and EMD F7 locomotives. Santa Fe's lone trio of Fairbanks-Morse (FM) "Erie-built" locomotives and the odd GE U28CG could also be seen occasionally running the line. A lone pair of Budd-built 90-seat, self-powered Rail Diesel Cars (RDCs) were acquired for express service.They operated "back-to-back" as a single train unit from May, 1952 until their accidental destruction in January, 1956.

In 1938, the rolling stock delivered for the San Diegan consisted of all lightweight stainless steel cars built by the Budd Company. The equipment used was as follows: [14]

Three additional coach units were added for weekend traffic. The San Diegan also enjoyed almost exclusive use of Santa Fe's Pullman-built (PPS) experimental "pendulum-suspension" chair car, #1100. In June, 1941 the railroad added a second eight-car trainset, also built by Budd, to handle the high demand for passage aboard the train. Its original consist was similar to the above save for an additional coach. Subsequent consists varied according to the traffic levels.

A representative, all-lightweight consist from the Summer of 1955: [15]

A representative, all-lightweight consist from the Summer of 1970:

A typical San Diegan consist under Amtrak in 1998: