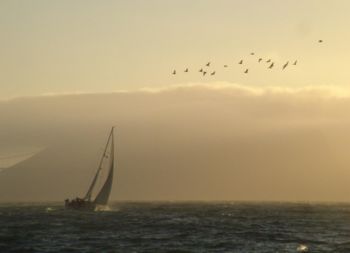 Sailing is the use of wind to move an object.

Usually "sailing" is associated with moving a boat or ship on water. But there are other kinds of sailing, including

The focus of this article is moving a boat or a ship across water.

In the past, sailing was the most common method of moving ships. Nowadays, sailing is most commonly used to move boats only. So, this article usually comments upon boats. But the principles which apply to boats equally apply to ships.

(There are numerous opinions of what the differences are between a ship and a boat. Bowditch states a ship was "originally a sailing vessel with three or more masts, square-rigged on all".)

In the last few hundred years, sailing has been increasingly undertaken for pleasure. This can be in the form of sailing races, or just "cruising" for the day or much longer. Sailing is even one of the Olympic sports.

There are still parts of the world where sailing is still the only or the best form of transport.

Humans have been sailing for thousands of years. No one knows when someone first sailed, but it is likely that sailing was developed in several parts of the world independently.

A sloop rigged boat is a fore and aft rigging plan that allows excellent performance to windward while using a single mast and usually just two sails. Any sail in front of the mast is called a foresail; there are three types of foresail, they are a jib, a genoa and a spinnaker. The sail behind, or aft of the mast is called the mainsail.

Sometimes a vessel powered exclusively by engine will put up a fore and aft "steading sail" to reduce the amount of roll caused by rough seas. As this sail does not move the vessel, it is not considered a sailing vessel and is not a "fore-and-aft rig".

Identified by sails which are approximately rectangles. The boom of a rectangular sail is above the sail.

Square-rigged sails can not be used to sail toward the wind. (See the Physics section for an explanation why.)

There is specific nomenclature for masts, sails and booms on multi-masted vessels.

Two masts, forward mast taller; this is called a "ketch" or a "yawl"

Two masts, aft mast the same height or taller; this is called a "schooner"

Three masts, provided the aft mast is not taller than the others

There are no hard and fast rules when there are four or more masts. For example, a seven-masted vessel named its masts "Monday" through "Sunday".

Sailboats can be monohulls (a single hull), catamarans (two hulls) or trimarans (three hulls). Each type of hull has its advantages and disadvantages.

Most simply, sailing uses the difference in air pressure between the two sides of a sail as mechanical energy to move a boat.

The same principle applies when the wind is blowing against one side of a fore & aft sail.

(The "back" side of a sail might not be facing directly toward the back of the boat if its boom and sheet(s) place the sail on an angle to the boat.)

View of fore-and-aft sail curve from above

The diagram to the right is an example of what a fore-and-aft sail might look like while sailing. The wind approaches the sail from the direction of "A". The wind which goes on the outside of the curve to point "B" has further to go than the wind which goes on the inside of the curve to point "B". The wind which must go further must therefore travel faster. This increased results in a decrease of pressure. As a result, there is a pressure difference between the two sides of the sail.

As a result, the sail attempts to move away from the greater pressure to the lower pressure. This force is transmitted to the boom and/or mast, then the hull, resulting in the boat moving. Since the force is not directly toward the bow of the boat, the boat will have a tendency to slide sideways in the water. To reduce the amount that this happens, a small boat often has a centerboard and a larger boat tends to have a keel which extends down.

Sometimes one or more jibs are used to speed up the air flow around the curved edge of the sail. This increases the pressure difference, which therefore increases the speed of the boat.

"Points of sail" indicates the direction from which the wind is coming.

There are no universally-agreed definitions where one "point of sail" ends and another begins. The points of sail are

Trimming is probably the most difficult aspect of sailing. Trimming is so complex it can probably be an entire article in itself.

When trimming a sailboat, one must balance many considerations, including

Basically, the intent of trimming is to set the sail at a point to maximise motion toward one's destination.

Just because a sailboat will make headway when pointing the boat towards its destination does not mean it is the best trim for the boat. This is because

In general, if the destination is not directly (or almost directly) toward the wind, aim the boat a little to windward of the destination. Then pull in the mainsail sheet until the sail has a good curve to it. That should be the best trim. If the sail has a jib, pull in its sheet, to just before the flow of the jib's air starts to cause some flapping in the curve of the mainsail.

Some sails have "telltails" in order to observe the flow of air over the sail. An indication of good trim is when telltails are near horizontal and flapping little.

Trimming a square-rigged vessel is even more complex than trimming a fore-and-aft vessel.

Sailing as a sport

The sport of sailing is undertaken by children, elderly adults and all ages between.

Sailing as a sport can be a race of less than an hour on a calm harbour or lake in a boat as small as two metres (about six and a half feet) or a race of several months around-the-world in a boat tens of metres long.

Sailing is one of the summer Olympic sports.

Sailing race classes are defined hull designs and/or sail designs. One reason for having precisely-defined classes is so that a sailing race is more likely to be a contest of the skills of the sailors to sail rather than a competition of their ability to raise money, their design skill or their construction skill.

Longer races, such as the Sydney-to-Hobart race or an around-the-world race are likely to include boats of many classes. The boats must all meet minimum safety and other standards, but are likely to have a wide variation in hull size, hull design and sail design.

In such races, one can obtain 'line honours' by being amongst the first to complete the race, but one can also win by 'handicap'. There might also be winners for various boat sizes or types; these categories vary between races.

Handicaps are an attempt to take into account the differences in hull size, hull design and sail design so that the best sailor (rather than the biggest or best boat) wins by handicap.

Racing strategies can include

Sailing as a lifestyle

Some people buy sailboats to be their homes. Some raise their children on their boats.

Some of them have full-time jobs, and some do not.

Some stay in one place and only wander on weekends and holidays, and some are always wandering. "Cruising" is the expression used when someone wanders while living aboard their sailboat.

There are sailing organisations in almost every country, even when land-locked.

Some are dedicated to a specific class of sailboat. Some have a broader charter.

Community sailing is a term used to define sailing programs which are designed to increase the community's access to the sport of sailing.