The AN/SPG-62 is a continuous wave, mechanically steered, terminal guidance illumination radar for the RIM-156 Standard SM-2 missile. These missiles use semi-active radar homing for their final guidance, so the Mark 99 fire control subsystem of AEGIS time-shares the illumination radars. Other functions of the Mark 99 system include loading, arming and launching the Standard missiles using the vertical launch system. 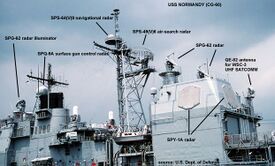 Three AN/SPG-62 antennas are visible, at far left and second from right

Primary search and midcourse guidance comes from the AN/SPY-1 phased-array radar, Only as the missile is making final approach to its target does there need to be AN/SPG-62 energy on the target, so the AEGIS battle management system can have more missiles flying against more targets than it has illuminators.

Burke-class and Kongo-class destroyers have three and Ticonderoga-class cruisers have four AN/SPG-62's. Spanish F-100 frigates, versions of which are used by Australia, Norway and South Korea, have two.

These radars, made by Raytheon, operate in the I/J bands with a peak power of approximately 10 kilowatts. Obviously, the specific operating frequencies change frequently and are classified, for reasons of protecting the missile guidance system from the target's electronic countermeasures (i.e., its self-protection electronic attack capabilty