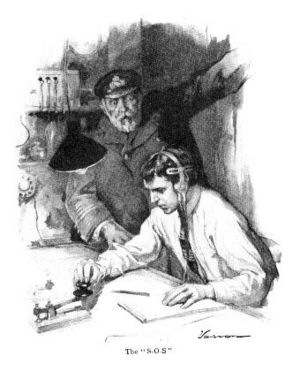 1912 drawing of a ship captain watching while a radio operator telegraphs Morse code during an emergency.

SOS is the conventional description used for the Morse code international distress signal (· · · — — — · · ·). Under the current version of the Safety of Life at Sea (SOLAS) convention, ships and search and rescue centers no longer monitor the 500 KHz maritime emergency channel; Morse code telegraphy is obsolete in maritime use.[1]

The SOS distress signal is actually an unbroken series of three-dots/three-dashes/three-dots, without internal letter spacing. However, because three dots form the letter S in International Morse code, and three dashes stand for the letter O, "SOS" became an easy way to remember the correct sequence. SOS has often been said to stand for such things as "Save Our Souls", "Save Our Ship", and "Stop Other Signals". However, these phrases are unofficial and came later, and are used as mnemonic devices to help remember the correct telegraphic pattern.

This distress signal was first adopted in radio regulations issued by German government, which took effect on April 1, 1905. It became the worldwide standard when it was included in regulations affixed to the second International Radiotelegraphic Convention, which was signed in Berlin, Germany on November 3, 1906, with an effective date of July 1, 1908.

Radio communication — originally known as "wireless telegraphy" — did not exist prior to the mid-1890s. Before then, seagoing vessels used visual signals, including semaphore flags, signal lights and flares, plus audio signals, such as bells and foghorns, to draw attention and signify when they required assistance. However, the range of these early devices was limited, and the long distances covered by radio communication in all weather conditions promised to revolutionize safety at sea.

Early radio transmitters could not transmit full-audio signals, so stations adopted the dots-and-dashes of Morse code that had been developed for land telegraphy. However, there was no commonly used distress call in landline telegraph practice. Although it was recognized that there was a need for standardized seagoing radio communication, competition between rival radio companies initially limited cooperation. In 1903, the first International Radiotelegraphic Conference met in Berlin, Germany. During this conference, Captain Quintino Bonomo, an Italian representative, brought up the issue of common operating standards, and in part suggested that "ships in distress... should send the signal SSS DDD at intervals of a few minutes". However, procedural issues were not a part of the Conference's mandate, so the Conference did not adopt an official distress signal, although Article IV of its Final Protocol, signed August 13, 1903, did state that "Wireless telegraph stations should, unless practically impossible, give priority to calls for help received from ships at sea." Thus, individual governments and companies were left to independently develop their own standards.

The first radio distress call to be adopted appears to have been "CQD", by the Marconi International Marine Communication Company, for Marconi-operated shipboard stations. It was announced on January 7, 1904 by the company's "Circular 57" that "...on and after the 1st February, 1904, the call to be given by ships in distress or in any way requiring assistance shall be 'C.Q.D.'." ("CQ" was a general call to all stations; amateur or "ham" radio operators still use it today when soliciting a contact with any station that hears the call.)

An alternate suggestion appeared in the 1906 edition of "Manual of Wireless Telegraphy for the Use of Naval Electricians" by S. S. Robison, which was used by the United States Navy. A section of this book stated that the symbols used by International Code of Signals for visual signaling would also likely be adopted by the radio service. In this system the visual flag signal "NC" stood for "In distress; want immediate assistance"; Robison suggested that this would also likely be adopted internationally as the distress call for radio operators.

The Notzeichen signal marked the first appearance of the SOS distress signal.

A second International Radiotelegraphic Convention, with a broader mandate, met in Berlin in 1906. This body signed an international agreement on November 3, 1906, with an effective date of July 1, 1908. An extensive collection of Service Regulations was included to supplement the Convention, and in particular Article XVI adopted Germany's Notzeichen distress signal as the international standard, stating: "Ships in distress shall use the following signal: · · · — — — · · ·  repeated at brief intervals".

The first well documented use of the SOS distress call is by the Arapahoe on August 11, 1909, when it suffered a broken shaft in the Atlantic Ocean, near Cape Hatteras, North Carolina. However, an article titled "Notable Achievements of Wireless" in the September, 1910 Modern Electrics suggests that an earlier SOS distress call was transmitted by the Cunard liner Slavonia, on June 10, 1909. There was some resistance among Marconi operators against dropping the use of "CQD", and at the time of the April, 1912 Titanic disaster, that vessel's Marconi operators transmitted both CQD and SOS distress signals. However, the use of CQD largely disappeared after this point, because of the needs of public safety to have a single international standard.

Unlike CQD, which was transmitted as three separate letters, the SOS distress call has always been officially transmitted as a continuous sequence of dots-and-dashes, instead of three individual letters — both the April 1, 1905 German law, and the 1906 Berlin regulations, explicitly defined the Morse code sequence, with no mention of any letter equivalents. However, as noted above, it soon became the practice parse the sequence into three equal parts, and refer to it as "SOS" — an early example is "The International Radio-Telegraphic Convention" in the January 12, 1907 Electrical World, which reported: "Vessels in distress use the special signal, SOS, repeated at short intervals." In International Morse, VTB, IJS and SMB also correctly translate into the · · · — — — · · ·  distress call sequence, but by tradition only SOS is used. Also, in American Morse code, which was used by U.S. coastwise vessels throughout much of the early twentieth century, although three dots also stood for the letter "S", three dashes designated the numeral "5", so in some early U.S. references the distress signal was said to be "S5S".

SOS has also sometimes been sent visually, composed of three-short/three-long/three-short light flashes, or with the letters "SOS" spelled out, for example, formed from logs laid on a beach, or stamped in the snow. The fact that SOS reads the same way both right-side-up and upside-down makes visual recognition easier.