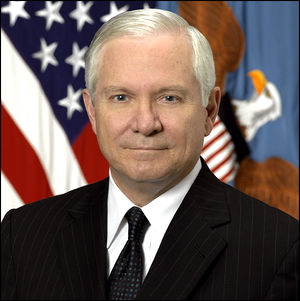 In April 2009, Gates announced there would be significant realignments in the upcoming Defense budget. He emphasized unmanned aerial vehicles and other systems for intelligence, surveillance and reconnaissance, as well as increasing the United States Special Operations Command funding. Several high-technology systems would be frozen, cut, or cancelled, including stopping production of the F-22 fighter, and a complete review of the Army's Future Combat Systems. Not unexpectedly, he ordered funds transferred from the prototype Zumwalt-class destroyers to the proven Burke-class, and ordered more Littoral Combat Ships and Joint High Speed Vessels. Production would also stop on the Air Force C-17 Globemaster III transport, and a second Airborne Laser aircraft would not be built.

Secretary Gates served as Director of Central Intelligence from 1991 until 1993. Secretary Gates is the only career officer in CIA's history to rise from entry-level employee to Director. He served as Deputy Director of Central Intelligence from 1986 until 1989 and as Assistant to the President and Deputy National Security Adviser at the White House from January 20, 1989, until November 6, 1991, for President George H.W. Bush.

Secretary Gates joined the Central Intelligence Agency in 1966 and spent nearly 27 years as an intelligence professional, serving six presidents. During that period, he spent nearly nine years at the National Security Council, The White House, serving four presidents of both political parties.

Until becoming Secretary of Defense, Dr. Gates served as Chairman of the Independent Trustees of The Fidelity Funds, the nation's largest mutual fund company, and on the board of directors of NACCO Industries, Inc., Brinker International, Inc. and Parker Drilling Company, Inc.

In 1967 he was commissioned a second lieutenant in the U.S. Air Force and served for a year as an intelligence officer at Whiteman Air Force Base in Missouri.

Before entering his present post, Secretary Gates was the President of Texas A&M University, the nation's seventh largest university. Prior to assuming the presidency of Texas A&M on August 1, 2002, he served as Interim Dean of the George Bush School of Government and Public Service at Texas A&M from 1999 to 2001. Dr. Gates has also served on the Board of Directors and Executive Committee of the American Council on Education, the Board of Directors of the National Association of State Universities and Land-Grant Colleges, and the National Executive Board of the Boy Scouts of America. He has also been President of the National Eagle Scout Association.

He is the author of the memoir, From the Shadows: The Ultimate Insiders Story of Five Presidents and How They Won the Cold War, published in 1996.

Dr. Gates and his wife Becky have two adult children.