See the tab above for Recipes of Roast turkey. 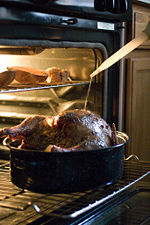 (CC) Image: Ethan Lofton
A turkey being basted during cooking in a turkey roaster.

Roast turkey—the preparation of the whole bird as a meal for a large group of people—has a long tradition in North America that dates back to the time when wild turkeys were shot to be roasted on campfires. It continues to modern times when a domesticated turkey is prepared in the oven to be served at a family gathering, typically on Thanksgiving and at holiday meals around Christmas Day and New Year's Eve. Turkeys, which originated in the Americas, also have a long tradition of being prepared in European countries such as England and France for festive occasions. Because of the large size of today's typical turkey, it is almost always roasted whole rather than being cut into separate pieces for other types of preparation, as is done with literally thousands of recipes for chicken, for instance. Another reason that turkeys are frequently found at large festive gatherings is the extremely low prices at which frozen birds are sold by supermarkets at holiday time—it is not uncommon to find 20-pound turkeys being sold for $20 or less.

Because of industrial breeding processes, a medium-sized turkey of today would have been considered a very large turkey 50 years ago. Recipes for roast turkey dating only to the mid-20th century often call for turkeys weighing between six and eight pounds. The 1961 edition of the Larousse Gastronomique, for instance, has several recipes with directions such as: "Stuff a medium-sized turkey (5 pounds) with best sausage meat...."[1]

Today a separate, boned turkey breast can be purchased that typically weighs more than the five pounds that Larousse calls for, while whole turkeys weighing 20 to 30 pounds are easily found. Because of the industrialization of today's typical turkey, they have become increasingly difficult to roast satisfactorily: even the most talented home cooks find it difficult to roast a turkey so that the quick-cooking breast meat remains moist and tender while, at the same time, the thighs are thoroughly cooked.

In Germany turkey might be roasted using butter, flour, salt and pepper.[3] Italians may use giblets, pancetta, pomegranates, salt, pepper, rosemary, unsalted butter and/or olive oil to roast turkey depending on the region and recipe used.[4] The British have been cooking turkey since at least the time of King Henry VIII. Some of their modern roast turkey recipes include preparing it with apples, garlic, Champagne, parsley, thyme, and sage.[5] [5] [6] The Irish might prepare roast turkey by including such ingredients as onion, pepper, nutmeg, cinnamon, cloves, sage, port, red currant jelly, sausage, eggs, and pork.[7] [8] [9] Modern French recipes are numerous and typically may use butter, stock, wine, port, giblets, streaky bacon, and sausage, but a primary ingredient, particularly around Christmas or New Years, is chestnuts, either cooked around the bird or as part of the stuffing. Very modest amounts of truffles or foie gras might also be incorporated. A French-style recipe from Canada uses onions, pepper, thyme, sage, carrots, orange juice, and maple syrup[10] A Mexican roast turkey might use allspice, raisins, parsley, potatoes, onion, raisins, oranges, chilies, and olives.[11] [12]

There are also thousands of recipes for various kinds of stuffing that can be cooked inside the roasting turkey. Each country has its own traditions for typical stuffing; although most of them involve breadcrumbs in one form or another, ingredients as exotic as oysters and chestnuts can also be found.

Some 1890 advice concerning flavoring comes from Mrs. Stephen J. Field's Statesmen's Dishes and How to Cook Them:

The turkey should be cooped up and fed some time before Christmas. Three days before it is slaughtered, it should have an English walnut forced down its throat three times a day, and a glass of sherry once a day. The meat will be deliciously tender, and have a fine nutty flavor.[13]

Another lavish embellishment for flavoring, one that today would cost many hundreds, or even thousands, of dollars, comes from a 1961 edition of the Larousse Gastronomique in its recipe for truffled turkey:

Discriminating gourmets believe that to achieve the best results, a truffled bird should be stuffed with truffles four or five days before cooking. After the truffles have fulfilled their function in flavoring the bird, they are removed and discarded and the bird is stuffed afresh with more truffles mixed with pork fat or raw foie gras, and then cooked.[14]

The words "stuffing" and "dressing" are frequently used interchangeably, but in correct usage "stuffing" is what is put inside the bird itself, while "dressing" can be precisely the same ingredients cooked in a receptacle outside the turkey.[15]

A popular innovation in recent years has been to submerse the entire bird in hot oil in a specially designed turkey deep-fryer rather than to roast it. Since this requires a large pot, a large amount of oil, and a dedicated high-heat source, this must generally be prepared outdoors for safety reasons. Deep-fat frying of turkeys, however, in spite of its popularity, is considered unsafe by both the National Fire Protection Association[16] and the Underwriters Laboratories.[17] A recent issue of Consumer Reports, though, has a brief article about their test of the "Masterbuilt Butterball Professional Series Indoor Electric Turkey Fryer", using a 12-pound turkey. Surprisingly for Consumer Reports, no mention of safety is made in the main text, but a caption under a photograph reads, "An electric fryer is safer than the gas-fired type."[18] In an earlier blog of November 19, 2007, they had said that neither the National Fire Protection Association or Underwriters Laboratories had approved turkey fryers. In an update to that blog, however, they state that electric fryers are "much safer than propane-fueled models" and that the Canadian Standards Association had certified at least one model.[19]

On Thanksgiving Day of 2010 in Tucson, Arizona, two house fires were reported to have been caused by turkeys bursting into flame while being cooked—one was caused by a turkey roasting in an oven, the other, a few minutes later, was in an outside turkey fryer. In both cases the fires were extinguished without injuries to anyone.[20]

(CC) Photo: Hayford Peirce
A turducken cut in two while being carved for serving.

Beginning, probably, in the 1990s, a new recipe for roast turkey called turducken has gained popularity in the United States. Its precise origins are in question, with several sources in Louisiana claiming to be the originator, but the method is always the same. A turkey is split, boned, and laid flat. It is then seasoned and perhaps covered with a flat layer of stuffing. A boned, split duck is then placed on the stuffing and more seasonings and stuffing added. Finally a boned, split chicken is placed on the duck's stuffing. Even more stuffing may now be added. Finally, the entire creation is pulled back together and bound with twine so that it resembles an ordinary, if inordinately fat, turkey. The turducken is then roasted by one method or another. At first a specialty-order item from a few select sources, turduckens are now widely available throughout the United States at holiday-time. Smaller, separate breasts of turducken are also available, both fresh and frozen. Many cultures, of course, going back thousands of years, have stuffed one fowl (or animal) with another, so the turducken is by no means a new culinary invention. In this particular guise, however, it is relatively recent.[21]