Rigging is a part of the physical structure of a theatre which supports or manipulates aerial scenery, lighting gear, or sound gear. This may include counterweight or "hemphouse" (e.g. sandbags & rope) manual flyrail systems, motorized winch systems, deadhung (permanently suspended) items, mainly drapery tracks, or gear suspended from trusswork which is then raised aloft by mechanical hoists or winch systems. In this context, the term "rigging" is also used to identify the hardware which supports aerial lighting and sound equipment in a concert setting, e.g. "arena rigging." 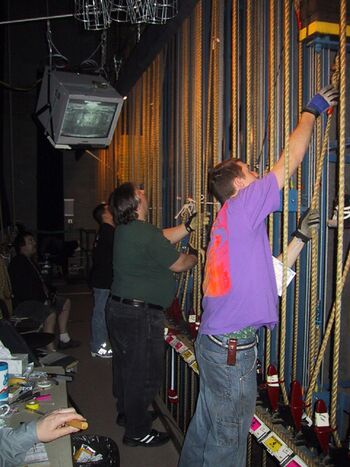 (GNU) Photo: Dave Vick
Flymen stand by to pull a cue on a single-purchase, manual counterweight flyrail on Phantom Of The Opera.

Manual Flyrails are systems consisting of ropes, steel or sand counterweights, steel cables, blocks or pulleys, and pipes, whereby a system operator or Flyman raises and lowers scenic elements or lighting gear above the stage space. Lights and scenery are supported by horizontal pipes, called "battens," which are suspended by a number of steel cables (in a counterweight system) or ropes (in a hemphouse system). These cables or ropes run vertically to the theatre's grid or roof beams, where they are led through a series of pulleys, called "loft blocks," that change their direction of effort toward one side of the stage, where the flyrail is located. Near the edge of the stage, these ropes or cables lead over a multiple-groove pulley, called a "head block," and descend toward the stage...

On a manual counterweight system with steel cable, the cables are attached to a counterweight "arbor," which is a steel cage designed to safely hold a series of cut-steel counterweight plates. ALso attached to the arbor is a rope handline or operating line (usually 3/4" manila hemp or synthetic), which the system operator or "flyman" uses to raise and lower the arbor. The handline is tied to the top plate of the arbor, and leads up and over the head block, back down to the flyrail and through a lever-actuated rope-lock, through and around another lower pulley variously called a "floor block," "idler," or "tensioning block," and then back up to the arbor, where it is tied onto the bottom. Steel counterweight plates, called "bricks" or "pigs," are placed on the arbor until their combined weight balances the weight of the scenery or lighting gear hung from the batten pipe. At that point, the Flyman is able to raise or lower the batten to a determined height by pulling on one half of the operating line. Once it is at its desired height, a lever-actuated rope lock is closed, which keeps the system pipe from drifting. Alternately, the Flyman may choose to take a piece of smaller cordage and tie a "snub knot" around the two sides of the handline, preventing them from moving against each other, which effectively freezes the batten.

On a "hemphouse" system, the various ropes from the system pipe descend to the "pinrail," where they are gathered together through a "sunday" or trim clamp, and tied off on a horizontal pipe of around 8"-10" in diameter with 1" pins sticking out of it, called a pinrail. Counterweight in the form of shot bags or sandbags is connected directly to the sunday/trim clamp, and the ropes are pulled together to move the batten pipe. In practice, the loaded batten (or "piece") is balanced with counterweight until it is left a bit "pipe-heavy," where the counterweight is just short of enough to balance the batten at the center of its vertical operating range. That way a pipe with a scenic element may be quickly raised, or "flown out," during a show, and gravity will lower the pipe (or "bring it back in") as desired. The more off-balance, or "out of weight," the pipe is, the harder and slower it is for the Flymen to raise it, but the faster it comes back in.

In both systems, the position of the operating rope(s) relative to the flyman's position will govern how high above the stage floor the batten pipe is. By marking a specific point on the rope(s), the flyman has a "trim" position he can repeatedly return the batten pipe to. He can therefore lower a curtain or a drop tied to the pipe repeatedly to the point where the bottom of the drop or curtain just brushes the stage, without "burying" the drop or curtain, and then fly it up and out of sightline.

Advantages of the manual counterweight system over the hemp system include ease of use, higher potential speed of batten travel, and higher maximum load capacity on each batten and also the whole system. Advantages of the hemp system include the ability to quickly and easily change the level of the batten pipe if so desired, and nearly silent operation.

The term "rigging" is also used as a verb, to describe the physical act of hanging lights, sound, or scenery in a theatrical space or concert arena, i.e. "they're rigging fifty-six motor points from the grid for this show."