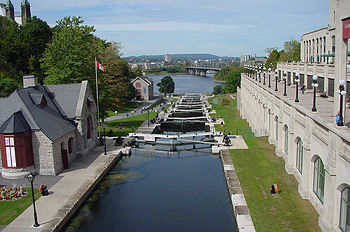 Stretching from Ottawa to Kingston, Ontario, and originally an important link in the water transportation system, the Rideau Canal is now plied by boats manoeuvred along the waterway by tourists in the summer, while in winter a section of it is transformed into what was touted as the "world's longest skating rink", although now that Winnipeg claims that honour, the National Capital Commission is proclaiming it the "world's largest skating rink" (emphasis added).[1][2]

The word rideau means "curtain" in French. The waterfall where the Rideau River pours into the Ottawa River looks like a curtain and was named Rideau by Samuel de Champlain, giving the river its name.

After the War of 1812, a decision was made to construct a canal joining Lake Ontario and the Ottawa River, in order to have a secure water transportation link. Lieutenant-Colonel John By was given the task of organizing the construction.

The digging was done by thousands of labourers, mostly using pickaxes, shovels and wheelbarrows. About 60 percent of the labourers were Irish, mostly recent immigrants, and the rest were mostly French Canadian. Some were accompanied by their families. Some died of malaria or in accidents on the job. Colonel By catalogued the deaths of men, women and children. We don't know the exact number, but it's estimated that over 1000 people died between 1826 and 1831 connected with the building of the canal. Memorials to these people have been constructed in Kingston, Ottawa and other places along the canal.

To support the construction work, a settlement was created in 1828, named Bytown after Colonel By. In 1855 it was renamed Ottawa, and in 1857 Queen Victoria made it Canada's capital.

The canal system includes locks and dams which have been called some of the major engineering triumphs of the 19th century. As an example of the calibre of the task, Hog's Back dam was higher than any dam in the U.S. at that time, and collapsed three times before it was successfully built.

One very short section of the Rideau Canal is formed by the southern end of Dow's Lake, an artificial lake surrounded by parks whose "recreational paths" are inhabited by strollers, joggers and cyclists while the nearby shore is seasonally dotted with ducks and geese. On the northwest corner of the lake, the two-storey Dow's Lake Pavilion, sitting on top of the water like a piece of jewellery, houses restaurants and places to rent recreational boats in the summer, and to come in out of the cold to put on one's skates in the winter.

Travellers to Ottawa will notice the canal as a distinctive feature of the city. When going downtown from the Ottawa Airport, the view of the canal from Colonel By Drive is always striking. Other attractions in the area may include waving to the Parliament building, shopping at Rideau Center, and then walking a few blocks further to explore the culinary wonderland of the Byward Market.

Winter activities include a "bed race", where contestants push beds across the frozen canal, snow sculpture and Portrait on the ice. Concession stands built on the ice at the edge of the lake sell "beavertails", distinctive pancake-like snacks topped with cinnamon or other flavourings.