In biology, reproduction (sometimes called procreation) refers to a process by which living organisms produce more organisms similar to them. The new organism(s) produced are called offspring of the previous organism(s), often called the parent(s). Although not every specimen of every type of organism gets a chance to reproduce within its lifetime, reproduction is a normal biological process which allows every species to propagate itself indefinitely, even though its individual organism specimens can eventually die. Because many or all the genes controlling the growth of the organisms are passed on from parent(s) to their offspring, the genes of the offspring are identical or similar to their parent(s) and thus the offspring grow to be identical or similar to the parent(s). Therefore, the offspring are usually considered to be the same species as the parent(s), although gradual changes in genes from one generation to the next can result in a gradual evolution of species. Reproduction in practically all species is part of their natural life cycle.

Reproduction can be asexual reproduction or sexual reproduction. In asexual reproduction, the same genes are generally passed from parent to offspring, save for some occasional mutations (changes in genes). Methods of asexual reproduction include cell division in micro-organisms and budding in multi-cell organisms. In sexually reproducing organisms, there is a prior production of gametes, which are haploid cells having only half the chromosomes of the usual diploid cells, which have a full set of chromosomes. Chromosomes are microscopic sub-cellular strands which carry the genes. The production of gametes, called meiosis (cell division without doubling of all chromosomes), results in a somewhat random distribution of genes in the haploid set of chromosomes of the gametes. Then, in an event called fertilization, two gametes are then normally recombined into a diploid cell containing a full set of chromosomes. This new diploid cell produced by fertilization is called a zygote and has a full, but often a somewhat randomly redistributed set of genes. The zygote then undergoes repeated normal cell division called mitosis, which involves a reproduction or doubling of all chromosomes such that each divided cell gets a full and identical set of them, to grow into newly reproduced offspring, often through an early embryo stage. This process of redistributing the genes in sexual reproduction often lets the offspring be similar to, species-wise, but not identical to the parent(s), thus allowing evolution to proceed by means other than mutation. 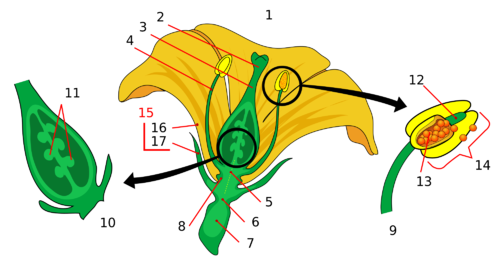 Most highly evolved animals have separate male and female organisms. Reproduction in such animals is always by sexual reproduction. The females carry ova (plural of ovum), unfertilized eggs, and males carry or can produce sperm. The ova are female gametes and the sperm are male gametes. When a sperm cell and an ovum come together in a process commonly called mating, the sperm can unite with the ovum, fertlilizing it to form a zygote or fertilized egg. Such fertilized egg(s) can then grow and develop for a while in the female body until the female exudes or lays the egg(s). Outside the female's body, the eggs continue to develop until they hatch, giving birth to the newborn offspring, which may be male or female. Most species of insects, fish, amphibians, reptiles, and birds have females which lay eggs. In most mammals and some other animals, the female does not lay eggs but allows the embryo to grow and develop inside the female's body in an organ called a uterus, until live birth is given to the offsping. This period of time when the embryo or fetus is growing and developing inside the female parent's body is called gestation or pregnancy. This is the way human children and almost all other mammals are born.