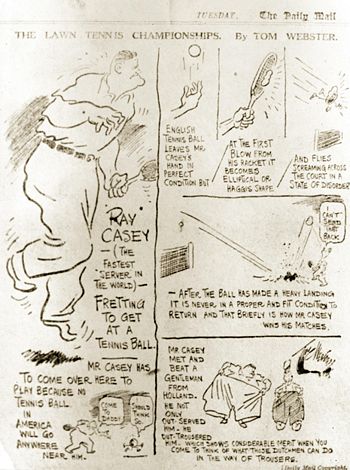 Raymond John Casey (born San Francisco, California, February 15,1900, died Palo Alto, California, January,1982) was a top American tennis player of the 1920s on the West Coast of the United States and later a successful coach. In spite of his success in California and neighboring areas he never had a national ranking because of his refusal, for economic reasons, to play on the East Coast.

A large and very powerful man for his time, Casey was a 12-letter man in athletics at the University of California, Berkeley. A left-hander, he was considered to have one of the fastest serves in the world. Although he won numerous tournaments on the West Coast, he played only once in any of the four major Grand Slam tournaments.

In the summer of 1925 he travelled with an American contingent to England. According to the Official Encyclopedia of Tennis, at the Eastbourne tournament Casey beat J.D. Patrick Wheatley of Great Britain in a 6-0 set that took only 9 minutes. This is still considered the fastest set ever played in a tournament match.[1]

Later that summer Casey and John Hennessey reached the finals of the Wimbledon doubles. In an era in which tournament doubles matches were considered almost as important as singles, they lost one of the most famous matches in the early history of tennis, being beaten 4-6, 9-11, 6-4, 6-1, 3-6 by one of the great French doubles teams of Jean Borotra and René Lacoste. In the Wimbledon singles Casey won 9 of 10 sets while beating three Europeans, Cornelis Bryan, Eric Hollins, and Carl-Erik von Braun, to reach the round of 16. There he lost a long, hard-fought match to the eventual Wimbledon champion, René Lacoste, 6-8, 4-6, 1-6.

Upon returning to the United States from Wimbledon, Casey never again left the West Coast to play tennis on the East Coast or in Europe, although he did make successful trips to Canada and Mexico for occasional tournaments. He and Margaret Laird, for instance, were the Canadian mixed-doubles champions in 1934.

In the 1950s and 1960s Casey was a successful tennis coach in Santa Monica, California, his most noted pupils being Bob Lutz and Julie Anthony. He is a member of the Northern California Tennis Hall of Fame.