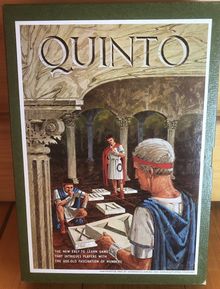 The original board game was sold in the 1960's by 3M (one of over two dozen games in the 3M Bookshelf series). Although the board games are no longer being manufactured, there is a lively online trade in old, used Quinto board games. There were three physical editions of the board game, and before buying one of these, it is important to verify that all the expected tiles are still present. The tile distribution and game board grid size affect the difficulty of game play. The original game with wooden tiles seems to be extremely rare. A superb online version of Quinto has been available since 2018. 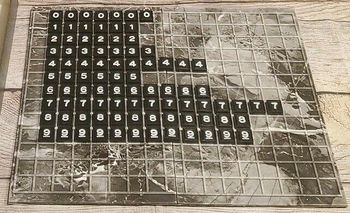 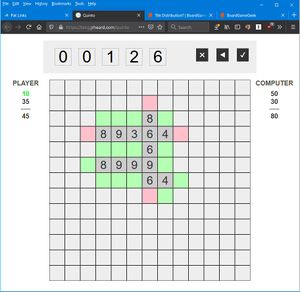 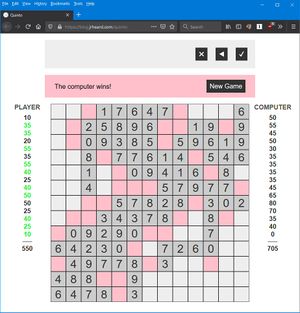 Since 2018, there has been an online version of Quinto[4]. It's programmer provided the computer with an "AI opponent" that is virtually unbeatable by humans, but also play hints that help humans increase their skills. The online game uses the 90-tile numerical distribution of the 1964 plastic-tile edition of the Quinto board game, but its board has four fewer vertical columns, making it a 13x13 grid. The game is powered by Javascript, which means it executes locally in your web browser and the game web page can be saved locally on your computer for offline use. The game rules and details about the source code are also online. 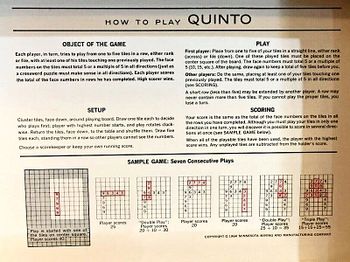 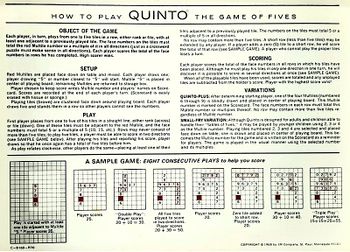