Proteus vulgaris is a rod-shaped Gram-negative chemoheterotroph bacterium. The size of individual cells varies from 0.4~0.6μm by 1.2~2.5μm. P. vulgaris possesses peritrichous flagella, making it actively motile. It inhabits the soil, polluted water, raw meat, gastrointestinal tracts of animals, and dust. In humans, Proteus species most frequently cause urinary tract infections, but can also produce severe abscesses; P. mirabilis produces 90 percent of cases, and is encountered in the community, but P. vulgaris is associated with nosocomial infection [1][2]

With basic microbiological technique, samples believed to contain Proteus are first incubated on nutrient agar to form colonies. To test the Gram-negative and oxidase-negative characteristics of Enterobacteriaceae, Gram stains and oxidase tests are performed. Candidae organisms are Gram and oxidase negative. The colonies of interest are then inoculated onto a selective culture medium, MacConkey agar.[3] Bile salts in the medium, as a normal part of the intestinal flora, suppress organisms that are not normally part of the home environment of Proteus. McConkey agar contains lactose, which Proteus does not ferment, allowing differentiation of organisms with different fermentation. Proteus, an anaerobe, can be further differentiated by incubating the culture under anaerobic conditions.

Rts1 is a large conjugative plasmid isloated from Proteus vulgaris.[4] The nucleotide sequencing of Rts1 was completed at Shinshu University School of Medicine, Japan. The genome has 217,182 base pairs and contains 300 open reading frames. The products of 141 of these showed significant sequence similarity to known proteins and among these, 99 were homologous to proteins whose functions are known or predicted. An interesting finding was the presence of tus-like genes that could be involved in replication termination. [5]

P. vulgaris obtains energy and electrons from organic molecules. It ferments glucose, sucrose, galactose, glycerol and occasionally maltose with gas production, but never lactose; it liquefies gelatin, casein, and blood serum, curdling milk with acid production. It is not limited to any specific temperature range, but good growth occurs at 20° and 30°, while growth is poor at 37°.

P. vulgaris has two interesting features. The cells are highly motile and swarm across the surface of the agar plates, forming a very thin film of bacteria. When the cells stop and undergo a cycle of growth and division, the swarming periods are interspersed with periods and the colony has a distinct zonation. The other feature is that P. vulgaris can produce urease and degrade urea to ammonia. By alkalinizing the urine, P. vulgaris makes the environment more suitable for its survival.

P. vulgaris is said to be present in all sewage, a constant source of contamination, which is a favorable medium for growth.

To reduce the risk of transmission of nosocomial pathogens from inanimate surfaces to susceptible patients, disinfection of surfaces in specific patient-care areas is recommended.[6] 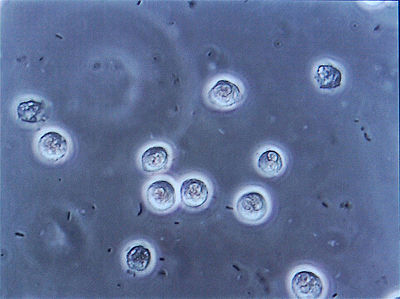 P. vulgaris and P. mirabilis are two common species of Proteus associated with human infection. One of the virulence factors identified is that they contain fimbriae. [7] Specific chemicals on the tip of pili enable organism to attach to selected site. Due to presence of peritrichouse flagella, Proteus is very motile. The most common infections caused by this genus are urinary tract infection and wound infection. P. mirabilis is a major agent in UTI. Proteus is abundant in urease production. Urease splits urea into carbon dioxide (CO2) and ammonia (NH3). Ammonia causes the urine to become very alkaline (pH >7), and may cause the formation of renal stones. Some of the symptoms of Proteus infection include flank pain, hematuria, and persistent alkaline urine.

In animals, some strains of Proteus can be harmful while others are not. Proteus isolated from the vomit of patients with meat-poison caused diarrhea and death when fed to mice. When different cultured Proteus was fed to mice, neither sickness nor immunity was present. When P. vulgaris was injected into the peritoneal cavity of guinea pig, it caused a rapid death. However, when the same amount was injected into the subcutis, an extensive necrosis resulted. Intravenous injection in cats caused severe vomiting, bloody diarrhea, and death.

Proteus species are highly resistant to antibiotics, so infections can be difficult to cure. Their plasmids are responsible for spreading antibiotics resistance genes in a microbial population. Many Proteus species have varied multi-drug resistant markers that are encoded on transferable plasmids. The resistant plasmids can be transferred with a frequency ranging from 2x10-4 to 4x10-2 per donor cells. Therefore, the antibiotics-resistant plasmids markers can be easily transferred by conjugation. However, most of the plasmid markers are not transferable, reflecting the characteristic of antibiotic resistance.

Proteus vulgaris is least resistant to ciprofloxacin and cefotaxime but when it is introduced to these drugs, higher doses than "normal" should be used.[8]

Action of Lysozyme on Penicillin-Induced Filaments of P. vulgaris

Low doses of penicillin causes gram-negative bacteria to transform into filaments, but penicillin itself does no harm to cell envelopes and cell wall. The hen egg white lysozyme, which does not affect normal cells of P. vulgaris P 18, modifies the envelope of filaments.[9]

Low-dose of penicillin stopped cell septation in P. vulgaris P 18 and caused its transformation into filaments without changing the structure of cell envelope. In the penicillin-induced filaments, lysozyme penetrated the cell envelope and dissolved the inner most layer of the cell wall. The action of penicillin caused removal of the barrier to this enzyme. As a result, the five-layered wall is reduced to three-layered structure. This three-layered structure contained the outer membrane and the filament was transformed into spheroplasts.