Printmaking refers to the use of a variety of media to create multiple images, or multiples. With the advance of digital printing it is perhaps hard to imagine that at some points in time all printed matters, both images and letters, were produced by hand. Early 15th century Europe, for example, saw the proliferation of books and manuscripts, whose existence owed to hand illustrations and hand lettering. Today, the newspapers, magazines, and tabloids one finds in a bookstore are all printed through a mechanical process known as offset lithography.

In printmaking, a finished original print is achieved with successive impressions made through contact with an inked or uninked stone, woodblock, plate, or screen. This original print is to be different from printed reproductions of artwork that exists in other media such as painting and drawing. For example, in many souvenir and gift shops at museums and galleries around the world, one may find a Picasso print of Les Demoiselles d'Avignon, which originally exists as a painting; this, however, does not constitute an original print, but it is not to say that Picasso himself did not produce an original print. Au contraire, his original prints such as etchings and lithographs could be found in museums and galleries, and in auction houses such as Sotheby's and Christie's.

In relief printing techniques, an image is created by carving away the surface of a block of material—usually wood—so that the original, uncut surface of the block produces the inked image, while the lower, cut-away areas leave the paper exposed. The process of carving the image is subtractive, so the artist must think in the negative, removing what should not be printed. (This is the opposite of intaglio techniques, described below.)

The oldest and most common form of relief printing is the woodcut. The process starts with a flat plank of wood cut along the grain, into which the artist carves using various knives, gouges, and chisels to create the desired image. Part of the charm of a woodcut print is in the visible artifacts of the process, such as the wood grain texture and stray marks from high spots in carved areas.

Fewer artifacts are evident in prints from wood engravings, which are cut into the end grain of hardwoods. With these harder, denser blocks, an artist can achieve a finer detail and quality of line than is possible with a standard woodcut, approaching that of engravings in metal. In fact, wood engraving and copper engraving share the same principle tool, called a burin. A typical burin has a knob-like handle made of wood and a shaft of square tool steel that is beveled at an angle to produce a sharp cutting point. By altering the amount of hand pressure applied to the burin, a skilled engraver can cut smooth lines of varying width. Wood engraving is a relatively recent invention, only becoming widespread during the 18th century. It soon became the standard method for reproducing images alongside text; for that reason, wood engraving blocks are often sized the same height as letterpress type. The popularity of wood engraving declined with the widespread adoption of photogravure as a means of reproducing photographs in print.

An even more recent form of relief print is the linoleum block print, or linocut. A standard commercially-produced linoleum block has a 3 mm (⅛-inch) thick layer of gray linoleum mounted on a substrate of composite wood such as particle board. The linoleum surface is softer and much more easily carved than wood, allows cuts to be made in any direction without regard to grain, and can be worked with relatively simple and inexpensive cutting tools. Those characteristics, along with the low cost of the material, make linocuts a popular relief printing method for students and hobbyists.

Whichever process is used to create the image, printing from the block follows similar steps: A thin layer of stiff ink is applied to the surface of the wood using a rubber roller, or brayer. The paper to be printed is placed on top of the woodblock, and pressure is applied to the paper using hand tools or a printing press. 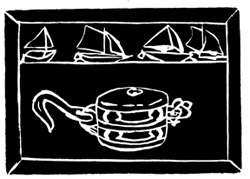 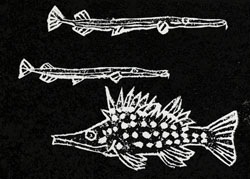