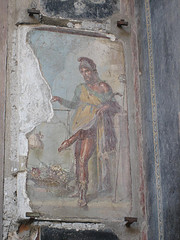 Priapus was a ancient Roman and Greek fertility god known primarily for his exceedingly large phallus. Priapus was said to be either the son of Dionysius or Aphrodite, and to have been rejected at birth due to his 'defect.' Priapus was seen as fertility god but as a poor fertility god, "the guardian of a poor man's plot" to quote Virgil's Eclogues (7.34.). Sacrifices to him were routinely of a frugal nature, including shells of turtles, bad figs, and even wax fruit. Priapus was closely associated with the fig tree, apparently due to the pun in that the Latin word for fig, ficus, also meant "hemorrhoid" or "anus."

Priapus was associated with hyper-sexuality as a ironic joke. While he was endowed with a perpetual erection he could never achieve climax as no woman would have intercourse with him because of his over-sized phallus.

His iconic feature gave rise to the name for the medical condition priapism (Latin priaprismus), referring to a man's inability to return to a flaccid state after erection.