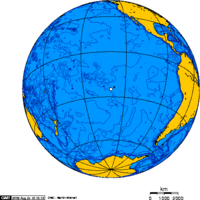 Philip de Cateret (1738-1796) was an officer in the Royal Navy, a Pacific Ocean explorer, and a hereditary Seigneur in Jersey.[1]

Between 1764 and 1766 John Byron lead an expedition consisting of HMS Dolphin and HMS Tahar.[2] De Cateret sailed as the first lieutenant of the Tahar.[1]

De Cateret was then promoted to command HMS Swallow, a vessel that was to accompany Samuel Wallis in the Dolphin on another expedition to the Pacific.[1] De Cateret and Wallis were separated while rounding Cape Horn, and de Cateret completed his expedition independently.