This article is about Pear. For other uses of the term Tree , please see Tree (disambiguation). 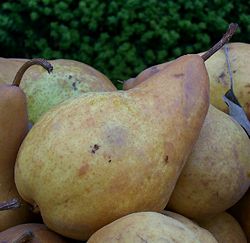 The pear is the fruit of various trees in the genus Pyrus, cultivated around the world for food.

Most varieties of pear go back to Pyrus communis in Europe, or P. pyrifolia and P. ussuriensis in Asia. Some are derived from hybridization of the above.

Pears are generally propagated by grafting, with the rootstock most often being P. communis or a variety of quince, which allows the grafts to begin producing fruit sooner, but does not perform as well in hotter and drier climates. Pear trees are able to grow in just about any type of soil, but can be sensitive to drought.

Depending on the variety, pears ripen in the fall or winter. A substantial amount of pears are grown for canning. Pears are also eaten raw, stewed, or baked in all sorts of desserts.