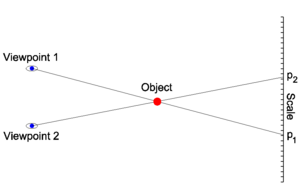 CC Image
Fig. 3: Annual stellar parallax is the angle α; E and E' are positions of the Earth half a year apart.

Stars are too far removed to observe their diurnal parallax, the angles involved are too small. For near stars, however, it is possible to measure the annual parallax (also known as stellar parallax) shown in Fig. 3. For an observer on Earth the near star seems to orbit during a year along a small ellipse when measured against the background of distant stars. The parallax of the distant stars is too small to be observed, so that they seem to be immobile. The ellipticity of the small ellipse depends on the angle between the plane of this ellipse and the plane of the Earth's orbit. The parallax angle α is used as a measure of distance: 1'' (arc second) corresponds to a distance of 1 parsec. Note that a star nearer to the Sun has a larger parallax angle α, so that the Sun-star distance, measured in parsec, is inversely dependent on the angle α, measured in arc sec.