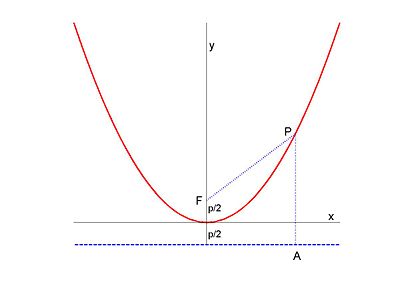 If the focus lies on the directrix, then the "parabola" is in fact a line. In the language of conic sections, this corresponds to the case when the plane contains a generator of the cone. 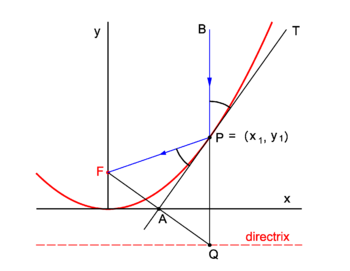 PD Image
Fig. 2. Reflection of beam B in a parabolic mirror.

Parabolic mirrors concentrate incoming vertical light beams in their focus. We show this.

Consider in figure 2 the arbitrary vertical light beam B (blue, parallel to the y-axis) that enters the parabola and hits it at point P = (x1, y1). The parabola (red) has focus in point F. The incoming beam is reflected at P obeying the well-known law: incidence angle is equal to angle of reflection. The angles involved are with the line APT which is tangent to the parabola at point P. It will be shown that the reflected beam passes through F.

Clearly ∠BPT = ∠APQ (they are vertically opposite angles). Further ∠APQ = ∠FPA because the triangles FPA and QPA are congruent and hence ∠FPA (angle of reflection) is equal to ∠BPT (angle of incidence).

We prove the congruence of the triangles: By the definition of the parabola the line segments FP and QP are of equal length, because the length of the latter segment is the distance of P to the directrix and the length of FP is the distance of P to the focus. The point F has the coordinates (0,f) and the point Q has the coordinates (x1, −f). The line segment FQ has the equation

Hence A lies on the x-axis. The parabola has equation,

and the equation of the tangent at P is

This line intersects the x-axis at t = 0,

The intersection of the tangent with the x-axis is the point A = (½x1, 0) that—as was just shown—lies on the midpoint of FQ. The corresponding sides of the triangles FPA and QPA are of equal length and hence the triangles are congruent.

Finally, it is of interest (but unimportant for the proof) to remark that AP is orthogonal to FQ and hence that points F and Q are related by orthogonal reflection in the tangent line AT.