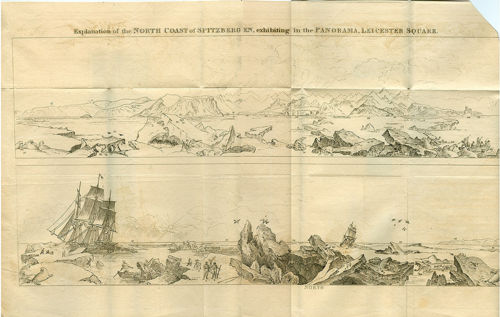 Engraving based on Henry Aston Barker's Panorama of the North Coast of Spitzbergen, 1819. From an original in the collection of Russell A. Potter

Panoramic paintings reveal a wide, all-encompassing view. The word "panorama", from Greek pan (παν, "all") horama (όραμα, "that which is seen") was coined by the Scottish painter Robert Barker in 1791 to describe his paintings of Edinburgh shown on a cylindrical surface, which he soon was exhibiting in London, as "The Panorama". From 1793 Barker moved his panoramas to the first purpose-built panorama building in the world, in Leicester Square and made a fortune.

Viewers flocked to pay a stiff 3 shillings to stand on a central platform under a skylight, which offered an even lighting, and get an experience that was "panoramic" (an adjective that didn't appear in print until 1813). The extended meaning of a "comprehensive survey" of a subject followed sooner, in 1801. Visitors to Barker's semi-circular Panorama of London, painted as if viewed from the roof of Albion Mills on the South Bank, could purchase a series of six prints that modestly recalled the experience; end-to-end the prints stretched 3.25 meters.

Barker's accomplishment involved sophisticated manipulations of perspective not encountered in the panorama's predecessors, the wide-angle "prospect" of a city familiar since the 16th century, or Wenceslas Hollar's "long view" of London, etched on several contiguous sheets. When Barker first patented his technique in 1787 he had given it a French title: La Nature à Coup d’ Oeil ("Nature at a glance"). A sensibility to the "picturesque" was developing among the educated class, and as they toured picturesque districts, like the Lake District, they might have in the carriage with them a large lens set in a picture frame, a "landscape glass" that would contract a wide view into a "picture" when held at arm's length.

Barker's Panorama was hugely successful and spawned a series of "immersive" panoramas: the Museum of London's curators found mention of 126 panoramas that were exhibited between 1793 and 1863. In Europe, panoramas were created of cities, historical events and battles, as well as landscape subjects (the Holy Land and the Arctic were especially popular among these). In both Britain and the US, the term was also applied to enormous canvas paintings which were scrolled past the viewer in a moving panorama, an extension of an idea that was familiar in the hand-held landscape scrolls of Song China Panoramas were only eclipsed by the moving pictures. (See motion picture.)

Relatively few of these unwieldy ephemera survive; a rare surviving great-circle panorama is the Panorama Mesdag in a purpose-built museum in The Hague, showing the dunes of nearby Scheveningen. An exhibition "Panoramania" was held at the Barbican in the 1980s, with a catalog by Ralph Hyde. Four large panoramas survive in North America: a Panorama of the Crucifixion in Montréal, a Panorama of the Battle of Gettysburg in Gettysburg, John Vanderlyn's Panorama of the Garden and Palace of Versailes at the Metropolitan Museum of Art in New York, and the Cyclorama of the Battle of Atlanta in Atlanta, Georgia. In the area of the moving panorama, there are somewhat more extant, though many are in poor repair and the conservation of such enormous paintings poses very expensive problems. The most notable rediscovered panorama in the United States was the Great Moving Panorama of Pilgrim's Progress, which was found in storage at the York Institute in Saco, Maine by its curator Tom Hardiman. It was found to incorporate designs by many of the leading painters of its day, including Jasper Francis Cropsey, Frederic Edwin Church, and Henry Courtney Selous (Selous was the in-house painter for the original Barker panorama in London for many years).