The Panic of 1893 or Depression of 1893 was a massive contraction in the American economy that began in 1893 and ended in 1897. Unemployment soared in all industrial centers; coal mining and lumbering were hard hit; farmers faced very low prices. The Panic was the worst economic crisis to hit the nation in its history to that point, and it had a far-reaching political impact, as the Democratic party took the blame and a realignment put the Republicans in power.

People attempted to redeem silver notes for gold; ultimately the statutory limit for the minimum amount of gold in federal reserves was reached and U.S. Notes could no longer be successfully redeemed for gold. The investments during the time of the Panic were heavily financed through bond issues with high interest payments (the most actively traded stock at the time) and went into receivership as a result of its bankers calling their loans in response to rumors regarding the NCC's financial distress.

A series of bank failures followed, and the price of silver fell. The Northern Pacific Railway, the Union Pacific Railroad and the Atchison, Topeka & Santa Fe Railroad all failed. This was followed by the bankruptcy of many other companies; in total over 15,000 companies and 500 banks failed (many in the west). About 20%-25% of the workforce was unemployed at the Panic's peak.

The severity of was great in all industrial cities and mill towns. Farm distress was great because of the falling prices for export crops such as wheat and cotton. Coxey's Army was a highly publicized march of unemployed men from Ohio and Pennsylvania to Washington to demand relief. A severe wave of strikes took place in 1894, most notably the Midwestern bituminous coal strike of the spring, which led to violence in Ohio. Even more serious was the Pullman Strike which shut down much of the nation's transportation system in July, 1894. 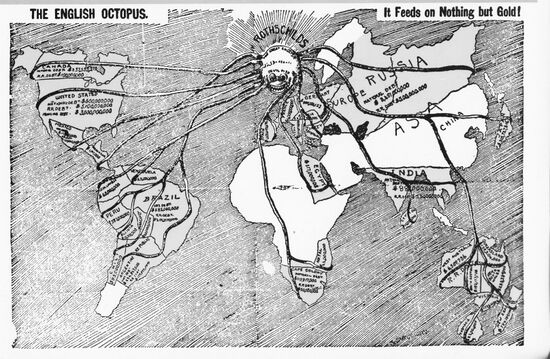 The Populist book Coin's Financial School (1894 p. 124) blamed the Rothschild's for controlling the world's money and causing the panic

The most memorable cultural events were the Chicago World's Fair of 1893. The hard times and utopian dreams that characterized the era were immortalized in L. Frank Baum's The Wonderful Wizard of Oz (1900).

The Sherman Silver Purchase Act of 1890, perhaps along with the protectionist McKinley Tariff of 1890, have been partially blamed for the panic. Passed in response to a large overproduction of silver by western mines, the Sherman Act required the U.S. Treasury to purchase silver using notes backed by either silver or gold. Politically the Democrats and President Cleveland were blamed for the depression. The Democrats and Populists lost heavily in the 1894 elections, which marked the largest Republican gains in history.

Many of the western silver mines closed, and a large number were never re-opened. A significant number of western mountain narrow-gauge railroads, which had been built to serve the mines, also went out of business. The Denver and Rio Grande Railroad stopped its ambitious plan, then under way, to convert its system from narrow-gauge to standard-gauge.

The depression was a major issue in the debates over Bimetallism. The Republicans blamed the Democrats and scored a landslide victory in the 1894 state and Congressional elections. The Populists lost most of their strength and had to support the Democrats in 1896. The presidential election of 1896 was fought on economic issues, and was marked by a decisive victory of the pro-gold, high-tariff Republicans led by William McKinley over pro-silver William Jennings Bryan.

The U.S. economy finally began to recover in 1896. After the election of Republican McKinley confidence was restored and the economy began 33 years of rapid growth.[1].