The PWA or Public Works Administration of 1933 was a part of the first New Deal agency that made contracts with private firms for construction of public works. It was headed by Secretary of the Interior Harold L. Ickes. It was created by the National Industrial Recovery Act in June 1933 in the midst of the Great Depression. It allotted $3.3 billion to be spent on the construction of public works as a means of providing employment, stabilizing purchasing power, improving public welfare, and contributing to a revival of American industry. Most of the spending came in two waves in 1933-35, and again in 1938. It was closed down in 1939.

Frances Perkins had first suggested a federally financed public works program, and the idea received considerable support from Harold L. Ickes, James Farley, and Henry Wallace. After having scaled back the initial cost of the PWA, Franklin Delano Roosevelt agreed to include the PWA as part of his New Deal reforms. 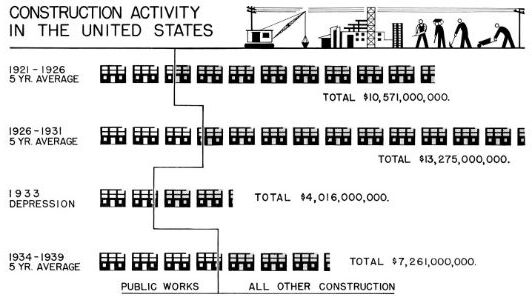 More than any other New Deal program, the PWA epitomized the Rooseveltian notion of "priming the pump" to encourage economic growth. Between July 1933 and March 1939 the PWA funded and administered the construction of more than 34,000 projects including airports, large electricity-generating dams, major warships for the Navy, and bridges, as well as 70% of the new schools and one-third of the hospitals built between 1933-1939. Streets and highways were the most common PWA projects, as 11,428 road projects, or 33 percent of all PWA projects, accounted for over 15 percent of total budget. School buildings, 7,488 in all, came in second at 14% of spending. PWA functioned chiefly by making allotments to the various Federal agencies; making loans and grants to state and other public bodies; and making loans without grants (for a brief time) to the railroads. For example it provided funds for the Indian Division of the CCC to build roads, bridges and other public works on and near Indian reservations. To alleviate unemployment the PWA set up the Civil Works Administration (CWA) for six months in 1933-34 that funded local government relief projects. Those projects were poorly planned, and often involved putting the unemployed to work on trivial "leaf-raking" projects so they could earn a paycheck, and obtain about the same cash and farm more dignity than a cash handout by the welfare office. 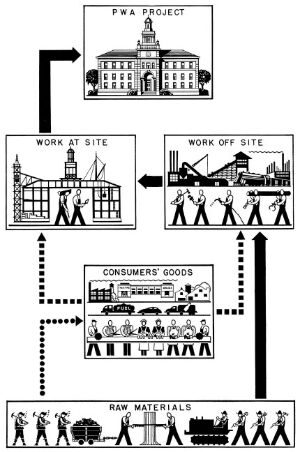 The PWA became, with its "multiplier-effect" and first two-year budget of $3.3 billion (compared to the entire GDP of $60 billion), the driving force of America’s biggest construction effort up to that date. By June 1934 the agency had distributed its entire fund to 13,266 federal projects and 2,407 non-federal projects. For every worker on a PWA project, almost two additional workers were employed indirectly. The PWA accomplished the electrification of rural America, the building of canals, tunnels, bridges, highways, streets, sewage systems, and housing areas, as well as hospitals, schools, and universities; every year it used up roughly half of the concrete and one-third of the steel of the entire nation. [1]

The PWA had its own administrative staff but all construction work was done by private contractors, who were urged--but not required--to hire the unemployed. Reeves (1973) argues that The competitive theory of administration used by Roosevelt produced inefficiency and delays. The competition over the size of expenditure, the selection of the administrator, and the appointment of staff at the state level, led to delays and to the ultimate failure of PWA as a recovery instrument. As director of the budget, Lewis Douglas overrode the views of leading senators in reducing appropriations to $3.5 billion and in transferring much of that money to other agencies in lieu of their own specific appropriations. The cautious and penurious Harold Ickes won out over the more imaginative Hugh S. Johnson as chief of public works administration. Political competition between rival Democratic state organizations and between Democrats and Progressive Republicans led to delays in implementing PWA efforts on the local level. Ickes instituted quotas for hiring skilled and unskilled blacks in construction financed through the Public Works Administration (PWA). Resistance from employers and unions was partially overcome by negotiations and implied sanctions. Although results were ambiguous, the plan helped provide blacks with employment, especially among unskilled workers.[2]

Some of the most famous PWA projects are the Triborough Bridge and the Lincoln Tunnel in New York City, the Grand Coulee Dam in Washington state, the longest continuous sidewalk in the world along 6 1/2 miles of Bayshore Blvd. in Tampa, FL, and the Overseas Highway connecting Key West, Florida, to the mainland. The PWA also electrified the Pennsylvania Railroad between New York and Washington, DC. The PWA did not create as much affordable housing as supporters would have hoped, building only 25,000 units of in 4½ years. At the local level it built courthouses, schools, hospitals and other public facilities. In general its projects were larger in scope than its rival agency the WPA. The WPA hired only people on relief who were paid directly by the government. The PWA gave contracts to private forms who did all the hiring. 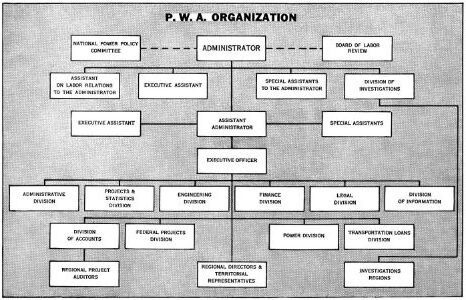 the PWA organization chart, 1939; Ickes was the Administrator

The PWA spent over $6 billion, and helped to push industry back toward pre-Depression levels. It lowered unemployment and created an infrastructure that generated local pride in the 1930s and remains vital seven decades later.