The origins of carpets and the tradition of carpet weaving predates written history and there is no proof of where or when the first carpets were made. Academics and experts champion theories, but it is unlikely that the whole story of the development of this art will ever be known.

Some suggest Central Asian nomads were the first to create carpets so that they would not sacrifice valuable livestock simply to use their hides as floor coverings. Opponents of this theory say that a nomad’s lifestyle was too harsh and arduous to allow time for the creative innovation required to develop a system of looping and knotting woolen threads into a pile that imitated animal pelts. Such a fine craft, they argue, could only have developed in a prosperous, settled community.

Aeschylus wrote of carpets in his play, Agamemnon, when Clytemnestra spreads fine carpets at the feet of her husband to welcome his return. He will not walk on them at first since that is an honor meant only for the gods.

"And stepping thus upon the sea's rich dye,

I pray, Let none among the gods look down

With jealous eye on me-reluctant all,

To trample thus and mar a thing of price,

Wasting the wealth of garments silver-worth."

Aeschylus wrote these words around 500 BC and the earliest surviving evidence of weaving is thought to date from that same time. The Pazyryk Carpet[1] was discovered in a royal burial mound in the Pazyryk Mountains of Siberia in 1949, preserved by a layer of perma-frost. Today this rug is in the Hermitage Museum in St. Petersburg, Russia. The carpet is highly sophisticated, with floral, geometric, and pictorial designs, indicating many generations of technique development. This legendary piece is excellent testimony to the durability of the weaver's art and it is worked in a style of knot that is still used today. 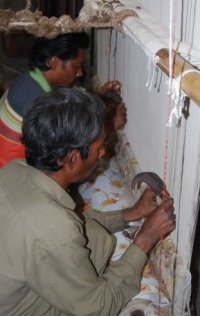 (CC) Photo: Jim Bennight
Hand knotting a rug. (This is the front.)

Few other rugs are known to have survived more than 500 years. Many of those are displayed in museums around the world. However, it isn't uncommon to find rugs over 100 years old that are still in usable condition, and some that, even today, are being walked on by great-great grandchildren of the original owners.

The first step in making a rug is gathering the raw materials. Traditionally most tribal rugs are made of wool sheared from the sheep twice a year, in the spring and in the autumn. Generally the wool from the spring shearing is considered superior and is used for making most rugs, bags, and clothing. Wool from the autumn shearing or from dead animals is less fine and is used mainly for making felts or tent fabrics. In some areas, tribal weavers also use cotton. Although cotton is actually more stable than wool, it is less durable and often more expensive than wool, so its use is limited. Finally, a much smaller number of rugs are made using silk, which is typically purchased from traders who bring it from manufacturing centers far away from the tribal areas.

The first preparation step is to clean the fibers. This is done by washing and combing (or carding) the fibers several times. Once clean, the raw fibers are spun into threads using a weighted object called a spindle. When a twist of the raw wool or cotton is attached to the spindle and the spindle is spun and dropped, it pulls the fibers out of the bunch and winds them into a long thread. After several threads have been made, they are in turn spun together to form a yarn. Typically two or three threads will be used to form a yarn. Yarn is normally spun in the opposite direction from the threads so that the fibers will bind together more tightly.

After the yarn is spun, it is treated with a substance that allows dye to be absorbed and fixed into its fibers, most commonly alum and iron sulfate. Once the yarn has been treated it is ready to be dyed. Traditionally the dyes used are made from natural local plants. For example, the madder plant yields a red dye, milkweed and buckthorn produce yellow, dyer’s woad and indigo produce blue, while browns and blacks can be made using walnut shells or iron filings. Since the late nineteenth century, some tribal weavers have also been using factory-produced chemical dyes. Most yarn is dyed in batches. Sometimes when the dye runs out in the middle of the dyeing process, the batch is finished with another dye lot. This produces yarns with slightly different colors that, when woven together, produce a chromatic shading effect called abrash, which is greatly admired by many Western collectors. 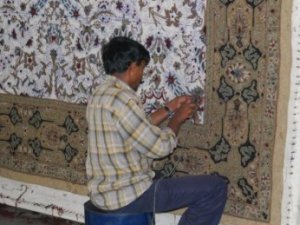 (CC) Photo: Jim Bennight
Hand Tufting (This is the back of the rug.)

Once the yarns are spun and dyed, the weaving process begins. First a set number of yarns are stretched in close parallel rows around a wooden frame called a loom. These yarns, called warps, determine the basic size and shape of the rug. Alternate warps are then attached to horizontal bars called heddles. When the heddles are raised and lowered, they create a space between the warps that is called the shed. Another yarn, called a weft, is attached to a weighted object, called a shuttle, and passed back and forth through the shed. Alternating which warps are raised and which are lowered produces a fabric of interlocked yarns that is called a plainweave. Sometimes each weft will be beaten down on top of the previous one to create a fabric in which only the wefts are visible. This type of fabric is called a tapestry weave (or kilim weave.) Other times the wefts will be wrapped around the warps according to a set pattern to create a more textured fabric that is known as a sumak weave (or brocade weave.) Finally, the weaver can tie extra bits of yarn to the warps between one or more rows of wefts. The extra bits of yarn, which can be tied in either symmetric or asymmetric knots opening either to the left or to the right, stick up above the warp and weft foundation to create a pile weave. 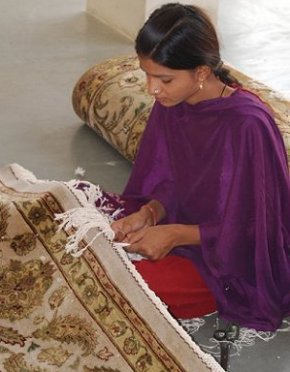 Hand-tufted and hand-hooked rugs are produced in much the same way. A tufting gun that works much like an over size sewing needle is used to push and pull threads of yarn through a pre-woven grid foundation. With a hooked rug, the loops of yarn are left intact to form a characteristically "knobby" pile. In a tufted rug, the tops of loops are sheared to expose the thread ends for a softer and plusher pile.

In some cases, several different weaving techniques may be employed together to produce a rug that has a variety of textures and visual effects.