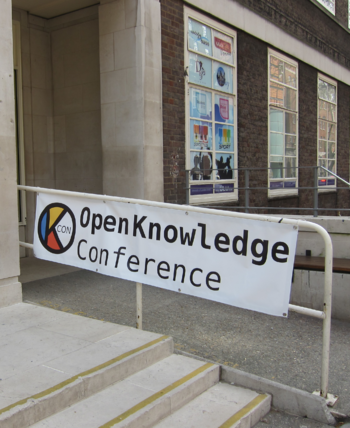 (CC) Image: Jonathan Gray
A banner at the entrance to University of London Union on the occasion of OKCon 2010 that took place there.

The Open Knowledge Conference (also known as OKCon) is an annual event organized by the UK-based Open Knowledge Foundation. It is dedicated to the discussion of emerging approaches to transparency and openness in all sectors of society.

In October 2005, the Open Knowledge Foundation (founded in 2004) co-organized the 5th World Summit on Free Information Infrastructures (WSFII) in London, where topics ranged from free soft- and hardware to open licenses, open geodata and open knowledge. On this foundation, an Open Knowledge Conference has been held in London each spring since March 2007. OKCon 2007 was also labeled as OKCon 1.0 but OKCon 2010 was celebrated as the fifth, which counted WSFII 2005 in.

OKCon 2007 was themed "Atomisation and Commercial Opportunity" and dealt with the diversification of formats in which information is presented on the World Wide Web, and with licensing issues derived from that. Since then, the range of topics covered in the program has widened to include open approaches to government, data, research, innovation as well as bibliographies, Linked data and the Semantic Web.