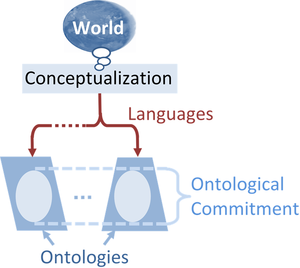 (PD) Image: John R. Brews
The ideas of a conceptualization are crystallized in a language expressing the conceptualization, leading to one or more ontologies. Each ontology shares some of its entities and some of their relationships with the rest, forming their joint 'ontological commitment'.[1][2]

This view of ontological commitment leaves considerations of what really is to ontology and focuses upon what amounts to a linguistic analysis. It is more an issue of semantic categories.[7]

In information science, a conceptualization is an abstract simplified view of some selected part of the world, containing the objects, concepts, and other entities that are presumed of interest for some particular purpose and the relationships between them.[8][9]

The question then arises as to how to describe the 'conceptualization' in terms that can encompass multiple ontologies. This issue has been called the 'Tower of Babel' problem, that is, how can persons used to one ontology talk with others using a different ontology?[9][2] This problem is easily grasped, but a general resolution is not at hand. It can be a 'bottom-up' or a 'top-down' approach, or something in between.[11]

An example of the problems encountered in comparing ontologies is found in translation between human languages. Ostensibly, as all humans live in the same world and have the same physical senses with which to see the world, one might expect to correlate human activity with language and thereby make rules for translation. However, that view is utopian because humans act upon cultural interpretation of their surroundings, and relating two cultures is an entirely different matter than understanding what term in both represents a 'rabbit'.[14][15] Some suggest that humans think in 'mentalese', but so far we don't have access to this level of conceptualization.[16]

However, in more artificial situations, such as information systems, the idea of a 'conceptualization' and 'ontological commitment' to various ontologies that realize the 'conceptualization' is possible.[1][12] A trivial example of moving conception into a language leading to a variety of ontologies is the expression of a process in pseudocode (a strictly structured form of ordinary language) leading to implementation in several different formal computer languages like Lisp or Fortran. The pseudocode makes it easier to understand the instructions and compare implementations, but the formal languages make possible the compilation of the ideas as computer instructions.

Another example is mathematics, where a very general formulation (the analog of a conceptualization) is illustrated with 'applications' that are more specialized examples. For instance, aspects of a function space can be illustrated using a vector space or a topological space that introduce interpretations of the 'elements' of the conceptualization and additional relationships between them but preserve the connections required in the function space.