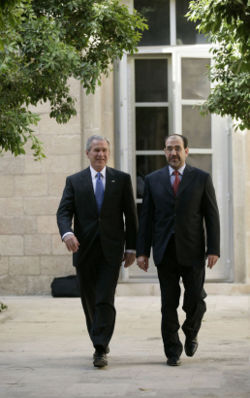 Nouri al-Makiki (1950-) (also transliterated al-Malaki) is a Shi'ite who is Prime Minister of Iraq. He is sometimes called Jawad, which was his pseudonym while being hunted by the security forces of Saddam Hussein; another affectionate name is Abu Israa. He is head of the Islamic Dawa Party. His government, along with Jalal Talabani as President, succeeded the Iraqi Transitional Government and now controls Iraq as U.S. forces leave.

Saddam forced the Dawa party leadership into exile in 1980, when they took refuge in Syria. Ibrahim Jaafari was then the party leader, and became interim prime minister in the transitional government after Saddam was ousted. Jaafari, however, was unacceptable to Kurdish and Sunni blocs, and Maliki was an acceptable alternative when a Shi'te coalition won a majority in 2005.

It was suggested he was selected as weak and without a strong grassroots power base, but has been consolidating power with his Shi'a opposition and allies, Americans, and Iranians. "Unlike other opposition figures he [Maliki] didn't build wealth, he is very honest and very organised," The cleric said his style is implicit in his party: "The Dawa party in its methods and way of working is very similar to the Communist party. They don't trust anyone. They surround themselves with people they know. Maliki, like all of us, is the product of exile. They have suffered for so long in exile so now they trust no one." [1]

The Iraqi Prime Minister has substantial authority without legislative approval, and is building security forces. He has established the Iraqi National Intelligence Service (INSI), under his direct control, and some Iraqis consider too close to the U.S. One intelligence officer told The Guardian, "We have our own eyes and follow what they are doing there...Maliki is running a dictatorship - everything is run by his office and advisers, he is surrounded by his party and clan members. They form a tight knot that is running Iraq now. He is not building a country, he is building a state for his own party and his own people." [1]

Maliki is playing to the Iraqi perception that a leader must be strong, and strong results in recent local elections reflect this. Mahmoud Othman, an independent Kurdish member of parliament, said "The problem is the people, they want a strong person."

During the election, he expressed confidence in Barack Obama's proposals for troop withdrawal. He said that he did not want to tell the U.S. electorate for whom to vote, but suggested that the shorter timetable expressed by Obama was probably better. He said he had negotiated, with George W. Bush, a "time horizon" for meeting "aspirational goals" for cutbacks, but "The Americans have found it difficult to agree on a concrete timetable for the exit because it seems like an admission of defeat to them. But it isn't."[2]

Sadi Othman, who started with Petraeus as a translator and became a close adviser, gained Maliki's trust. After he interpreted for U.S. Speaker of the House Nancy Pelosi and Congressman John Murtha, without Petraeus in the meeting, in what he termed "very tough" confrontations, Maliki turned to him afterwards and said "Now I know what President Bush is going through." [3]

As troops pull out of the cities, with June 30 being named National Sovereignty Day, he is confident. He said he expected violence, such as a significant bombing in Kirkuk, and 250 killed in recent attacks. Still, he said "Those who think that Iraqis are not able to protect their country and that the withdrawal of foreign forces will create a security vacuum are committing a big mistake." He blamed the attacks on al-Qaeda in Iraq and Ba'ath Party holdouts from Saddam's regime.[4]