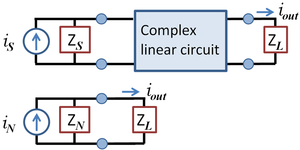 The upshot of using Norton's theorem is shown in the figure: the circuit behavior is boiled down to a simple current divider.

It will be noted that when the Norton impedance ZN is much larger than the original parallel source resistance ZS, the output current across the load ZL benefits from a favorable current division when contrasted with direct attachment of the source to the load. In any event, the Norton circuit makes this current-division role of the more complex circuit clear. In general, this theorem is a tremendous aid to an intuitive understanding, essential for the creative design of circuits .

To determine the Norton current, short circuit the two terminals and measure or calculate the short-circuit current between the terminals. 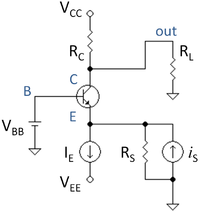 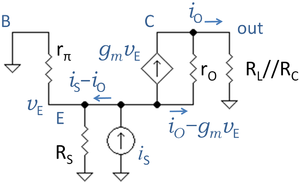 The bipolar circuit in the figure at left represents a current buffer. The operation of this circuit is as follows. The DC current source IE determines the current leaving the emitter in the quiescent state when no signal is applied. By appropriate selection of the DC current source it can be arranged that the transistor is configured to operate usefully, that is, it is in active mode.

A signal voltage iS is applied to the emitter. The DC current source IE does not permit any time varying current to pass through it, so at the signal frequency it behaves as an open circuit. No signal is lost through it. As a dual to this behavior, DC base voltage VBB will not support a time-varying voltage across it, so it acts as an AC short circuit. The signal causes no change in base voltage. The time-varying current drawn through the base of the transistor is very small compared to that in the emitter (lower by a factor of the transistor β). As the signal alters the emitter current, the collector current follows suit, and the output current iout in the load resistor RL is a copy of the input signal iin.

The transistor is a very nonlinear device, so the output signal current in the load resistor is not a faithful amplification of the input signal at the emitter unless the signal amplitude is small. For purposes of estimating the amplifier behavior, the assumption is made that the signal amplitudes are very small so the amplifier appears to behave as a linear circuit. Under these circumstances, the transistor can be approximated by a linear circuit composed of resistors called the hybrid pi model. The linear small-signal approximation to the circuit using the transistor hybrid pi model is shown in the figure with a few algebraic expressions derived by application of Kirchhoff's current law. This circuit is used to determine the Norton current (the short-circuit current) of the buffer.

The value of the Norton current is the output current through a short-circuit load, that is, with RL = 0. From the small-signal circuit on the right, this current is iO, which is found by equating the values of the emitter voltage found from the output and the input sides of the circuit:

Equating these expressions, the Norton current is found as:

where the approximation holds because RL is taken as zero for a short-circuit output condition, and because gmrO >> 1. The input resistance RS is likely to be quite large (if it were not the signal driver would be better represented as a Thévenin source with a small series RS) so the parallel resistance RS//rπ is approximately rπ, and the Norton current is approximately:

where gmrπ = ß. Inasmuch as ß is probably over 100, the Norton current is very nearly the same as the signal current (current gain is nearly unity). 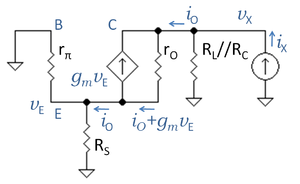 To apply Norton's theorem, the resistance of the circuit looking back into the circuit from the output node is needed. That is accomplished using the second small-signal circuit. To determine the Norton impedance, the signal source is turned off (open-circuited), a test current ix is applied to the output, and the resulting voltage at the output vx is determined. Applying Ohm's law to obtain the voltage vE at the emitter node, one finds:

Equating these two expressions the corresponding resistance is:

The impedance ZO is seen at the collector looking into the circuit at the point where current iO is injected, after the parallel resistors (RC//RL).

The output resistance is found looking backward from the load, so RL is removed from the circuit, leaving only RC in parallel with ZO. Therefore, the Norton impedance is:

If this circuit is realized using a simple resistor RC, the likelihood is that ZO >> RC, in which case the current division predicted by the Norton equivalent circuit places RC in parallel with the load. The success of this circuit thus depends upon how large RC is compared to the driver resistance RS, and limitations imposed upon signal swings limit how large RC can be. To avoid losing signal current to RC and thus reducing signal current to the load, a large RC is desirable. For this reason, this circuit is better implemented using a load circuit that involves more transistors, an active load. Such techniques can greatly increase the effective RC; as the effective RC increases, the upper limit upon the Norton resistance is ZO, which is likely to be considerably larger than the driver impedance RS because:

which is considerably larger than rO, itself a large resistance. Thus, favorable current division can be achieved with this buffer circuit modified to use an active load.