A joint U.S.-Canada organization, the North American Air Defense Command (NORAD) is responsible for the aerospace defense of North America. It was formed during the chilliest days of the Cold War, when the main Soviet threat would be coming across the Arctic; the geometry meant that the forward early warning systems needed primarily to be in Canada, and that whether or not a bomber was threatening Vancouver or Seattle, the first line of defense would be in Canadian airspace. When the threats and technologies of the day made area and point defense, using surface-to-air missiles and anti-aircraft artillery, NORAD coordinated their efforts and fed intelligence to them. Essentially, NORAD ran the integrated air defense system (IADS) for North America.[1]

The commanding officer of NORAD is a U.S. general or admiral who is also the head of United States Northern Command. The deputy commander is a Canadian flag officer.

With the advent of submarine-launched cruise and ballistic missiles, the alliance extended along the coasts as well as far north, with maritime patrol aircraft, of both the U.S. and Canada, flying from Newfoundland and Alaska.

After bomber attack on the interior of the both countries became much less likely, IADS facilities not on the coasts or northern frontier were cut back, saving funds. Had the 9-11 Attack taken place decades earlier, there would have been interior radars, fighters, and antiaircraft weapons to intervene over internal regions, but the available fighters had to fly inland, from bases far from the eventual targets. 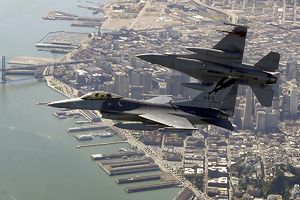 As far as known, the only deployed surface-to-air missiles in North America is a U.S. Army Air Defense Artillery battery in the Washington, D.C. metropolitan area. At random intervals, or during large public events, fighters will patrol over several metropolitan areas, but the reality is that there is no strong air defense inside the borders of North America. Even if the fighters were available, there is no large-scale fighter control radar system; the air traffic control system is called "radar", but relies principally on transponders to track and identify aircraft. Air traffic control radar, as opposed to a military air search radar such as the AN/MPQ-64, is not capable of accurately tracking a noncooperating target simply by its radar reflection. Without a transponder signal, one airliner looks like another; positive identification comes only from a fighter close enough for visual inspection, including reading the aircraft number painted on the tail.

High-performance jet fighters can deal with threats from airliners and business jets, but they may not the best platform for other threats. Given that there is also a requirement for visual identification, the United States Coast Guard has been tasked with intercepting low-flying, slow-speed aircraft in restricted air space.

It also should be noted that the warhead of even a large air-to-air missile such as the AIM-120 AMRAAM is in the 40-50 pound range, as opposed to the 300 pounds of a heavy antitank missile (e.g., AGM-65 Maverick) and the hundreds to thousands of pounds of Mark 8x series conventional bombs. An airliner hit by an air-to-air missile may crash, but it will not vaporize; 100 tons of metal, fuel and flesh are going to hit somewhere.

The iconic command post, during the Cold War, was deep inside Cheyenne Mountain in Colorado; Cheyenne Mountain Operations Center is the most hardened facility in North America. Eventually, however, it became vulnerable to accurate missiles with large thermonuclear warheads, but was protected against anything less. Nevertheless, the underground command post has been put into caretaker status, and NORAD operations are in nearby, and cheaper to operate, conventional buildings. NORAD's operations center is now at nearby Peterson Air Force Base.

Regional command centers are located at:

NORAD does have a significant role in space surveillance to the benefit of both countries. Nevertheless, its key mission was Cold War defense, and, from the U.S. perspective, merging it with Northern Command, which is responsible for the overall defense of the United States mainland, made sense. NORAD also assists in detecting drug and other smuggling, feeding information to law enforcement.

Every December, NORAD enjoys sending out tracking reports on an unusual airborne target, using reindeer as power sources and a jolly fellow in a red suit as mission commander.[2]

As opposed to use in foreign theaters of operations, they would rarely if ever have assistance from an E-3 Sentry airborne radar aircraft.