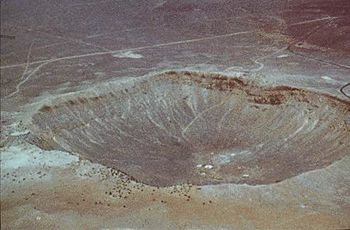 Between 20,000 to 50,000 years ago, a small asteroid about 80 feet in diameter impacted the Earth and formed the 1.2 km diameter Meteor Crater in Arizona, USA. Impact craters on Earth were long refuted but the discovery of fragments of the Canyon Diablo meteorite help prove that the feature was in fact an impact crater.

The National Aeronautics and Space Administration’s Near Earth Object Program coordinates NASA sponsored work to detect, track and catalogue Near Earth Objects, asteroids and comets that could approach Earth near enough to be hazardous.

The NEO Program also supports and initiates communications within the community of astronomers and the public in the event that any potentially hazardous objects are discovered.[2]

In the USA, initial attempts at coordinating efforts by the US Government to ascertain threat from NEOs are credited to Representative George E. Brown Jr. who chaired the House Science and Technology Committee in the 1990s. In 1991, Brown initiated Congressional request of NASA to investigate NEO hazards. Following the 1994 impact of Comet Shoemaker-Levy 9 into Jupiter, Brown’s Committee asked NASA to accelerate Program Spaceguard to locate 90% of NEOs larger than 1 kilometer within ten years.[3][4][5][6][7]

The NEO Search Programs include various groups within NASA and external to track, detect, analyse and catalogue NEOs. Cooperating agencies in other countries include Australia, Italy and Japan.[8]

Statistics denoted in charts and tables by NASA's NEO Program are available at the Jet Propulsion Lab's website Near Earth Asteroid Discovery Statistics. They have been revised to show updated parameters for near-Earth asteroid (NEA) reflectivities (albedos) and provide better estimates of diameters.

Active and planned teams currently work to detect NEOs. Initially photographic comparisons of a region of the sky were made to detect any changes made over a period of time. Using a time frame of minutes, the comparisons were able to discern close moving objects from galaxies and stars which would show no change in position. NEOs would appear to rise above the background when viewed with stereo viewing microscopes.

At the present time, all NEO discovery teams use charged couple devices (CCD) rather than photographs. CCD cameras record images digitally and are more sensitive and accurate than older photographic methods but use a similar method of detection in that several CCD images separated by a few minutes are taken of the same area of sky and are then compared to detect any relative movement. Computer – aided analyses has also replaced the earlier stereo-microscope technique.

Separation of each digitally recorded object and location from one image to the next, the direction of travel and brightness are employed to indicate proximity to Earth, size and orbital characteristics. The greater the change in position on digital images, the greater the proximity of the NEO to Earth since changes in position will have a negative correlation with distance from Earth, in other words, an increase in relative position is correlated with a decrease in distance.[9][10]

The LINEAR is a cooperative effort with the U.S. Air Force and Massachusetts Institute of Technology's Lincoln Laboratory. The site began its NEO detection efforts in 1996. The LINEAR program was created to apply technology for surveillance of earth orbiting satellites, to detecting and cataloging Near Earth Asteroids (or NEOs) that pose a potential hazard to Earth.

LINEAR is responsible for a majority of NEO discoveries. By 10/21/04 LINEAR had 1,622 confirmed NEOs. The LINEAR has very sensitive CDDs and a rapid read out rate allowing them to cover large areas during each observation.

Linear telescopes record observations on an area of sky 5 times during one evening, usually covering the elliptical plane in which most NEOs would be likely to appear. Observations are processed at the main Lincoln Laboratory site at Hanscom, AFB in Lexington, MA each night. Results are transmitted to the Minor Planet Center (MPC) which designates LINEAR's new discoveries of NEOs, comets, Unusual Objects, and main belt asteroids.

NEAT is a cooperative effort between NASA/Jet Propulsion Laboratory and the US Air Force employing two autonomous observing systems, one at Maui Space Surveillance Site (NEAT/MSSS), and one at the Mt. Palomar Observatory (NEAT/Palomar).[14][15]

The Spacewatch team searches for NEOs 20 nights each month, scanning at a rate that covers about 200 square degrees of sky each month down to magnitude 21. Each region of the sky is scanned three times at thirty minute intervals to ascertain whether objects have moved relative to the background stars. The large-mosaic CCD camera operates in a "stare" mode rather than in the scan mode.

Spacewatch's detection rate for Earth-approaching asteroids is nearly 300 per year. On December 9, 1994, Spacewatch detected a ten-meter sized asteroid (designation 1994 XM1) that passed within 105,000 kilometers of the Earth. In May 2001, the Spacewatch group discovered their first Potentially Hazardous Asteroid (PHA)

Spacewatch is involved with the study of the Centaur and Trans-Neptunian minor planet populations and the sizes of short period comet nuclei.[16][17]

LEONOS was established in 1993 at Flagstaff, Arizona to discover near-Earth comets and asteroids. They employ a 0.6-meter f/1.8 Schmidt telescope with a 4K x 4K CCD detector, covering a field of view of 2.9 x 2.9 degrees. LEONOS perform four scans monthly per region over the entire sky to magnitude of V=19.3, about 100,000 times fainter than observed with the unaided eye.

As of 2004 July, LONEOS had submitted more than 2.8 million asteroid observations to the IAU Minor Planet Center and anticipate discovering 500 of the 1-km or larger NEOs and about twice as many smaller ones after 10 years of full-time operation.[18][19][1]