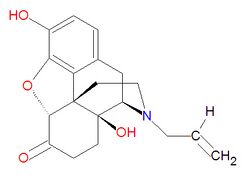 Naloxone (naloxone hydrochloride) is a drug that acts as an opiate antagonist[1]. It has a high affinity for the receptors that serve the body's endogenous opiates, or exogenous drugs like morphine, diamorphine, codeine, pethidine, dextropropoxyphene and methadone as well as drugs of abuse such as heroin.

Naloxone hydrochloride (molecular mass: 363.84) is a synthetic congener of oxymorphone, differing from oxymorphone in that the methyl group on the nitrogen atom is replaced by an allyl group.[2]

The IUPAC chemical name for naloxone is 17-allyl-4,5α-epoxy-3,14-dihydroxymorphinan-6-one hydrochloride, and it has chemical formula C19H21NO4•HCl

"Opioids" are substances that act upon the body in ways similar to the ways in which opiates - derivatives of the opium poppy- act, and "endogenous opioids" are opioids produced by the body itself. The endogenous opioid systems comprise three major families: the enkephalins, leu-enkephalin and met-enkephalin; the endorphins, particularly beta-endorphin, and the dynorphins; these families are encoded by separate genes that code for large precursor molecules (pro-opiomelanocortin (POMC); proenkephalin and prodynorphin respectively) which are cleaved enzymatically to produce the relevant active opioid peptide. These endogenous opioids act at three large classes of G-protein coupled receptors - the mu receptor (at which morphine binds with very high affinity; the delta receptor (at which leu-enkephalin is the endogenous ligand) and the kappa receptor (at which dynorphins bind with high affinity). In the brain, POMC is produced only by subpopulations of neurones in the arcuate nucleus and caudal brainstem; dynorphin is expressed by many populations including the vasopressin cells of the supraoptic nucleus and paraventricular nucleus and by neurones in the arcuate nucleus (it is also produced in the pituitary gland. Enkephalins however are produced by many different neuronal populations, and leu-enkephalin can also be produced by cleavage of prodynorphin. These "systems" play many different physiological roles; there is not one opioid system in the body, or even three, but many: opioids play a different role in each neuronal population where they are expressed.

Use in morphine withdrawal

Interest in the addictive properties of opiates has stimulated research into naloxone, which has been associated with immediate withdrawal symptoms in users of heroin. Naloxone may counter the behavioral suppression of opiates (e.g. the euphoria and lethargy following morphine injection) by its competition with opiates at mu receptors. It is also possible that naloxone itself exerts some behavioral influence, either in the form of general activity enhancement or as a suppressor of behavior. Experiments with the hamster[3] suggest that naloxone injected before morphine can drive activity levels even above those of saline controls. But other research on naloxone has shown that it, like morphine, may suppress some behaviors, e.g. sexual behavior in male rats[4]. In some sases, for naloxone to depress activity it appears to be necessary that it be injected at relatively high doses (e.g. 10 mg/kg and above in rats), indicating that, in such cases, its effects are not exerted at mu receptors but probably at kappa receptors.[5]

Clinically, naloxone is used to treat respiratory depression caused by opioids, for example when this is a side-effect of morphine given to relieve pain after surgery, or to control cancer pain. It is also given to reverse respiratory depression in newborn babies whose mothers were given opioids (like pethidine) during labour. Naloxone may be given by injection into a vein, muscle or under the skin, or by intravenous infusion. It is also given to reverse the effects of overdosing on morphine or heroin.