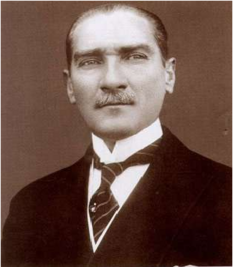 Mustafa Kemal, known after 1934 as Mustafa Kemal Atatürk (1881-1938) was the dominant leader of Turkey after 1919, and the president 1923-1938. He modernized and secularized Turkey, shedding the traditionalism of the old Ottoman Empire using the army, the educators and bureaucrats, and his "Republican People's Party" with support from the middle classes, in creating a permanent revolution.

His father was a minor official who died when the boy was 7, but inspired him and pointed the boy to a secular education. In 1893 he went to a military school called Askeri Rustiye. In 1896 he graduated from Selanik Askeri Rustiyesi (Selanik Military School) and continued at another military school Manastir Askeri Idadisi. Mustafa Kemal graduated in 1899 and continued his education at the Istanbul Harp School a military school in Istanbul. Upon graduation he was commissioned as a lieutenant, and was promoted to staff captain in 1905. Because of his outspokenness regarding the administration of the State he was banished to Damascus, Syria.

While in Damascus he was commanding officer of the fifth army and in line of duty traveled throughout Syria witnessing many administrative abuses. During October of 1906 Mustafa Kemal founded the Vatan ve Hurriyet Cemiyeti a political organization. With his friends he extended the borders of this organization to Beirut and Jerusalem. Meanwhile he became an Adjutant Major in 1907 and appointed as Chief of Staff in Damascus. After being reassigned as commander of the third army on 13th October 1907 he was posted to Salonica. The Vatan ve Hurriyet was actively working with members of another organization called Ittihat ve Terakki (Party of Union and Progress) with Mustafa Kemal as a member. In 1876 the Party of Union and Progress forced the emperor Sultan Abdulhamit to apply the Constitution and reopen the parliament called Meclis-i Mebusan. These brought about the declaration of Mesrutiyet II or the “Second Constitutional Government.” 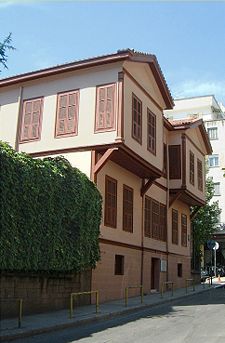 On 23 July 1908 the Second Constitutional Government was declared while Mustafa Kemal served as Adjutant Major in Salonica and was active in the Party of Union and Progress. After the “31st March Rebellion” Mustafa Kemal was reassigned to the General Staff in Istanbul on 19th April 1909. Emperor Abdulhamit was dethroned and Sultan Resit replaced him. After Italy attacked Tripoli on 5th October 1911 Mustafa Kemal was sent there to its defence on 15th October 1911. In October 1912 the War of the Balkans broke out.

World War I broke out after Germany’s attack on Russia (1 August 1914). On 29 October 1914 the Ottoman Empire joined Germany in the war.

On 18th March 1915 the English Fleet attempted to sail through the Dardanelle Straits but Ottoman on shore artillery succeeded in preventing the passage. Because of this failure the British tried to conquer the Gallipoli Peninsula. The Ottoman's 5th Army including Mustafa Kemal’s division stood in defense of the peninsula. The British attacked Seddulbahir and Ariburnu on 25th April 1915. Ataturk’s 19th Division stopped the invasion. Although on 25th April 1915 the British were forced to withdraw, they continued attacking on the 26 and 27 April 1915 as well. However every assault was rebuffed.

With signing the Mondros Ceasefire Agreement on 30 October 1918 the First World War came to an end. However the price the Ottomans were willing to pay was significant. Italians were to share Antalya, Iskenderun, Adana, Mersin, Antep, Maras, and Urfa the southern part of Turkey. Kars was to be governed by the English. The Greeks received Izmir on 15th May 1919. Mustafa Kemal Ataturk moved to establish a new and independent Turkish State to be ruled by Turks resulting in the War of Independence.

Emerging as a military hero at the Dardanelles in 1915, Ataturk became the charismatic leader of the Turkish national liberation struggle in 1919. Following a series of impressive victories against all odds, he led his nation to full independence. He put an end to the antiquated Ottoman dynasty which lasted more than six centuries and spanned three continents and created the Republic of Turkey in 1923, establishing a new Republican government.

Mustafa Kemal Atatürk introduced a broad range of swift and sweeping political, social, legal, educational, medical, economic, and cultural reforms that were at the time virtually unparalleled. It abolished the Caliphate, Islamic educational institutions and religious courts, introduced new dress codes as well as a civil law and replaced the Arabic script with the Latin alphabet.

Establishment of the Turkish Republic on October 29, 1923 consolidated Ataturk’s military power and political authority both internationally and domestically. However Ataturk hesitated to use heavily overt force because of opposition in the military ranks, which were very conservative and religious and might not support his other radical reforms. Turkish society was not homogeneous. This made it difficult to restructure the Ottoman legacy and heritage which was based on religion.

The new constitution was enacted by the parliament led by Ataturk without any mention of religious authority. This first step gave rise to many western oriented reforms which changed peoples’ daily lives in every way.

The Turkish Grand National Assembly abolished the caliphate, a politico-religious institution dating to the 16th century, on March 3, 1924. This dramatic action made Turkey the first secular and modern state in the Islamic world. Secularization was further supported by the suspension of the Ministries of Religious Affairs and Pious Foundations and by the creation of a national educational system. The new secular constitution aimed to create a modern nation and unity among Turkish citizens. Ataturk, inspired by the French Revolution's anticlericalism and hostility to religion, demanded a secular, ethnically homogeneous republic ready to join the Western world. He banished Islam from school curricula and from the public sphere, glorified (and falsified) Turkish history,[1] and "purified" the Turkish language in the name of national pride and unity. The new Turkish national consciousness denied the existence of the many non-Turk ethnic identities within Turkey, most notably that of the Kurds, who continued to resist into the 21st century. The army became the embodiment of Ataturk's policies and values, with strong support from the bureaucracy and the urban middle class.

The dress code passed in 1925 objected to create a modern look and encourage this unity and to abolish the previous dress code introduced as Ottoman Empire’s dress code in 1826 by the Mahmud II, allowed the people to wear the fez as a religious symbol . The Civil Code banned wearing of fezes for men and the veil for women. Just after the code was enacted a huge opposition surfaced against the CHP (Republican People’s Party). Ataturk traveled in different cities in Anatolia to convince people that the new civil code was inevitable for the Modern Turkish State as a part of secularization by saying in Kastamonu: “I see someone on the back wearing a fez which is a totally opposite from a modern look. The civilized world will laugh at us, if we continue to wear these kinds of uncivilized clothes.”

More significantly however Atatürk initiated a number of very significant educational reforms. His ultimate goal was to refashion the entire educational system along Western, secular lines in order to promote modernization and encourage Turkish nationalism at the expense of Islamic tradition. He mandated the adoption of the Latin alphabet in 1928. His government introduced free, public primary education and waged a campaign against adult illiteracy. Too few Turkish educators and experts were available, so the program concentrated on the cities and larger towns. To alleviate the shortage of teachers the government established a large number of "Village Institutes"[1][2].

In 1933 Ataturk and his ministers recognized a window of opportunity to modernize the country's system of higher education. Turkey invited over 190 eminent intellectuals who were being persecuted by the Nazis in their native lands (in 1937-38 citizens of Austria and Czechoslovakia were included among the invitees) to help in this regard. This immigration gave birth to the University of Istanbul which in turn provided much of the academic feedstock as other universities were established in ensuing years.[[3]][[4]][[ http://en.citizendium.org/wiki/German_Diaspora_in_Turkey]][5]

The period 1918-23 saw a struggle for the survival of a Turkish state in the face of Allied demands, and the foundation of the secular republic against great odds was tempered by xenophobia and bitterness. Atatürk's policy of "revolutionism" between 1923 and his death (1938) included principles of republicanism, nationalism, populism, etatism, and secularism that were collectively known as "the Six Arrows." Atatürk's basic foreign policy was one of stability, peace and even friendship with all Turkey's neighbors. He rejected involvement in Great Power politics. Atatürk was essentially a realist who repudiated adventurism and expansionism so he could accomplish internal reconstruction in peace. His abolition of the caliphate in 1924 proved highly controversial among Muslim intellectuals world-wide, while his overthrow of the Sultanate (1922) and the proclamation of the Turkish Republic (1923) had been welcomed.

From the beginning of the Turkish republic, a mainstay of Turkish foreign policy was friendship with the Soviet Union. Good relations with the Soviet Union guaranteed Turkey's continued security on its northeastern frontier and in the Black Sea. Following the Italian conquest of Ethiopia, and largely as a consequence of this, a Turco-British rapprochement began to take shape. Close cooperation between Turkey and Britain during the 1936 Montreux Conference on the Straits Question further contributed to this reconciliation. Another aspect of Turkish foreign policy was the Balkan Entente of 1934 to guard against aggression in the region. Turkey's role in the Saadabad Pact of 1937 was also active and enthusiastic. Regaining Turkish sovereignty over the Straits at the Montreux Conference and winning back the district of Hatay were among the most important successes of Turkish diplomacy under Atatürk's auspices.[2]