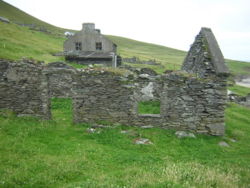 The ruins of the house in which Muiris Ó Súilleabháin grew up on the Great Blasket Island.

Muiris Ó Súilleabháin (Maurice O'Sullivan), (February 19, 1904 - June 25, 1950), became famous for his memoir of growing up on the Great Blasket Island off the western coast of Ireland, Fiche Blian ag Fás (Twenty Years a'Growing), published in Irish and English in 1933. As one of the last areas of Ireland in which the old Irish language and culture had continued unchanged, the Great Blasket Island was a place of enormous interest to those seeking traditional Irish narratives. Ó Súilleabháin was persuaded to write his memoirs by George Derwent Thomson, a linguist and professor of Greek who had come to the island to hear and learn Irish. Thomson edited and assembled the memoir, and arranged for its translation into English with the help of Moya Llewelyn Davies.

While Fiche Blian ag Fás was received with tremendous enthusiasm by critics, including E.M. Forster, their praise at times had a condescending tone (Forster himself described the book as a document of a surviving "Neolithic" culture). Such interest was tied up with romantic notions of the Irish primitive, and thus when Ó Súilleabháin tried to find a publisher for his second book, Fiche Blian Faoi Bhláth (Twenty Years a-Flowering), there was little interest, as this narrative necessarily departed from the romantic realm of turf fires and pipe-smoking wise-women. Ó Súilleabháin's death by drowning in 1950 has been regarded by some as a possible suicide.