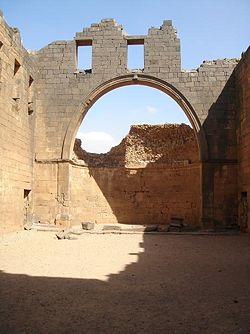 Muhammad was born in Mecca in the “Year of the Elephant”. This was the name given to the year in which the city survived an attack led by Abraha, the Abyssian governor of Yemen, that was carried out with the help of elephants and is identified by most scholars with the year 570 in the Gregorian calendar. Mecca, located in the mountainous Hijaz region of western Arabia, was at that time a commercial city, where the caravan routes that brought goods from Yemen and Abyssinia paused before heading north. It was also one of major centres of pilgrimage for the Arabs. Every year, during the month of Hajj, Arabs from all tribes went to Mecca to perform certain rites at the Kaaba, a cubic structure that housed 360 idols.

Muhammad’s father, Abd Allah, died a few months before his birth in the city of Yathrib (later known Medina), when he returned from a journey to Syria. He left Muhammad’s mother, Aminah, with only five camels and a female slave, Barakah. Although Muhammad was a member of the Quraysh tribe, that had settled in Mecca some 150 years before his birth and that run the affairs of the city, the clan that he belonged to, the Hashemites, had fallen on bad days. However, the Hashemites had kept their religious prestige, which came from the fact that its patriarch was in charge of keeping the Kaaba and its facilities (such as the well of Zamzam) in good condition.

Meccan families had the custom of sending their children to spend some time with the Bedouins in the desert, because the air of Mecca was considered unhealthy. It was also believed that living in such harsh conditions would build character. For the Bedouins, the fostering of these children came with the expectation of receiving money and gifts from their Meccan patrons. Despite her difficult situation as a widow, Muhammad’s mother managed to fund a Bedouin wet nurse, Halimah (from the tribe of the Beni Saad), who took Muhammad to live with her family as a nomad in the desert. According to Muslim tradition, it was during this stay with his Bedouin family that an extraordinary event took place: two men dressed in shining white clothes, opened Muhammad’s chest, removed his heart, purged it of all sin and put it back in his chest.

Muhammad returned to his mother at the age of six, but he soon lost her. She died in Abwa, during a journey she took with Muhammad to visit her husband’s grave at Yathrib. After the death of his mother Muhammad went to live with his paternal grandfather, Abd al Muttalib, sharing the household with his uncles Hamza and Abbas, who were his age. However, at the age of 8, Muhammad’s grandfather died. Muhammad's new guardian was his uncle, Abu Talib, the new patriarch of the Hashemite clan.

Muhammad started to work as a shepherd and also began to join his uncle on his trade journeys to Syria. On one of these journeys, when he was 8 or 12 (accounts vary) his uncle’s caravan passed by a Christian monk named Bahira, who invited the merchants to share a meal with him. Initially the men of the caravan left Muhammad behind, in a camp, but Bahira told them to bring everyone. After questioning the boy, Bahira recognized him as a prophet based on a mole covered with hair that he had on his back and told Abu Talib to take good care of him for the would be a great man in the future.

In 595, at the age of 25, Muhammad was working in the service of a widow and distant cousin, Khadijah. She had heard of Muhammad’s reputation of honesty and asked him to sell her goods in Syria. She sent with him one of her servants, Meisara, whom she instructed to observe the behaviour of Muhammad to see if what was said of him was really true. According to Muslim accounts, another Christian monk (a certain Nestorius) also recognized Muhammad as a prophet. Meisara not only attested to Muhammad’s honesty, but he also reported how two angels had protected him from the burning sun with their wings. After the commercial journey, Khadijah proposed marriage to Muhammad, which he accepted. In celebration of their union, Muhammad freed Barakah, while Khadijah gave him Zayd, a fifteen year old slave, who Muhammad later adopted as his son. Although he could have taken more wives (pre-islamic custom allowed a man to take as many wives as he wished), Khadijah remained Muhammad’s wive for the next twenty-five years, until her death. She bore Muhammad six children: two boys, al-Qasim and Abdullah (both died in infancy) and four daughters, Zaynab, Ruqiyya, Umm Kulthum and Fatima.

Besides working as a businessman, Muhammad also used to take his family to make spiritual retreats in the caves that are found on the hills surrounding the city of Mecca. During these retreats Muhammad and his family fasted, prayed and offered food and alms to the poor. According to Islamic traditional sources, on the seventeenth night of the month of Ramadan of 610, while Muhammad was undertaking one of these retreats in Mount Hira, the angel Gabriel awoke him from his sleep and ordered him to recite. Muhammad declined, saying that he wasn’t a kahin, (soothsayer), but the angel insisted, enveloping him in an embrace that left him breathless. After the angel Gabriel demanded him to recite for the third time, the following words began to pour from Muhammad’s mouth: "Proclaim! (or read!) in the name of thy Lord and Cherisher, Who created man, out of a (mere) clot of congealed blood: Proclaim! And thy Lord is Most Bountiful,- He Who taught (the use of) the pen, Taught man that which he knew not". During the next 22 years Muhammad had other revelations. Muslims believe that these revelations are the word of God. After Muhammad's death, these revelations, recorded by his followers on rocks or animal bones, were compiled to form the Qur'an.

The experience left Muhammad so distressed that he considered throwing himself off Mount Hira, but he was stopped by the voice of Gabriel saying that he was the apostle of God. He returned to the cave and was comforted by his wife Khadijah, hiding underneath her robes. After hearing Muhammad’s account of the experience, Khadija decided to pay a visit to her Christian cousin Waraqah ibn Nawfal, who considered Muhammad to be a messenger of God.