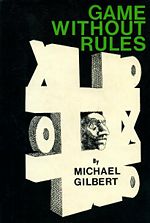 The cover of the 1967 first edition published by Harper & Row 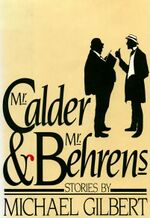 The cover of the 1982 first edition published by Harper & Row

Mr. Calder and Mr. Behrens are fictional counterspies who appeared in 24 short stories and 16 radio plays by the British mystery and thriller writer Michael Gilbert in the 1960s through the 1980s. Most of the stories first appeared in either the British magazine Argosy or the American Ellery Queen's Mystery Magazine, and were then collected in two books, Game without Rules and Mr. Calder & Mr. Behrens; One story, Double, Double, was later republished in a collection of Gilbert stories. Most of the stories involve finding, and dealing with, British traitors or deeply embedded foreign agents; a few take place in Europe; one particularly grim one is set in World War II, during which Mr. Behrens is the bomb-maker in a failed attempt to assassinate Adolf Hitler.

When Game without Rules first appeared in 1967, the noted mystery critic Anthony Boucher called it the second best collection of spy stories ever written, next only to Somerset Maugham's Ashenden: Or the British Agent. Later that year Boucher changed his mind to write that Game without Rules was even better than Ashenden.

Another appraisal comes from Barzun and Taylor's encyclopedic Catalogue of Crime:

The adventures of Mr. Calder and Mr. Behrens (and the Persian deerhound Rasselas) in the service of counterintelligence. There is clueing and detecting and danger and driving around, and (as one would expect) the storytelling is first-rate. But the genre seems to us more liable to repetition of effects than crime and detection. The best stories here include the longest, The Spoilers, and The Headmaster, not a school story.[1]

The two counterspies are outwardly gentlemanly and urbane. Beneath their innocuous appearance, however, they are ruthless and exceedingly hard-boiled killers. They are long-time close friends who are unmarried and who live relatively close to each other in the vicinity of Lamperdown, Kent. Mr. Behrens lives at The Old Rectory, while Mr. Calder is at The Cottage, Hyde Hill. (Gilbert's own address, at which he lived for many years, and where he died at age 93, was Luddesdown Old Rectory, Cobham, Gravesend, Kent.)

Mr. Calder lives with Rasselas, his 128-pound Persian deerhound whom he has adopted from a dead adversary. Like his master, Rasselas is quiet and unassuming, but also a highly trained and deadly killer. He is by Shad Jehan out of Galietta. His color is "Golden with darker patches. Eyes Amber. Nose blue-black."[2]

Both Calder and Behrens did classified work during World War II, then in the late 1950s went to work for a Mr. Fortescue at the Joint Services Standing Intelligence Committee (External Branch), more often known as JSSIC(E). In one story, the Prime Minister recalls his predecessor telling him that "E" Branch takes on the jobs "so disreputable" that no other agency will handle them.[3] The cover of Mr. Fortescue is that of bank manager at the Westminster branch of the London and Home Counties Bank. As one adversary refers to them bitterly just before dying, both Calder and Behrens are "middle-aged cut-throats"; by the time the stories end, however, they have grown old but not noticeably softer or less capable.

Rassalas, however, in "A Prince of Abyssina", is killed by a German war criminal intent on killing Mr. Calder. After rescuing his friend, Mr. Behrens then helps Mr. Calder dig a

"deep grave behind the woodpile, [they] laid the dog in it and filled it in, and patted the earth into a mound. It was a fine resting place, looking southward over the feathery tops of the trees, across the Weald of Kent. A resting place for a prince.

"Colonel Weinleben they buried later, with a good deal more haste and less ceremony, in the wood. He was the illegitimate son of a cobbler from Mainz and greatly inferior to the dog, both in birth and breeding."

In most of Gilbert's work, which seems urbane, ordered, and placid on the surface, there are grim undertones and hard edges not far below. In "A Prince of Abyssinia" Colonel Weinleben signals Mr. Calder that he is coming to kill him. "Why?" asks Mr. Fortescue.

"I tortured him," said Mr. Calder. "And broke him. He'd never forget."

Later Colonel Weinleben takes up residence at the Seven Gables Guest House, where he goes birding and is "particularly nice with Mrs. Farmer's two young children."

"And in the evenings he would sit in the lounge, drinking a single glass of schnapps as an aperitif before dinner, and entertaining Tom and Rebecca with accounts of the birds he had observed that day. It was difficult to imagine, seeing him sitting there, gentle, placid, and upright, that he had killed men and women—and children, too—with his own well-kept hands. But then Mr. Wendon, or Weinleben, or Weber, was a remarkable man."

"Michael was an exceptionally fine storyteller, but he's hard to classify," said one of his British publishers after his death. "He's not a hard-boiled writer in the classic sense, but there is a hard edge to him, a feeling within his work that not all of society is rational, that virtue is not always rewarded.".[4]

Adapted from "The Decline and Fall of Mr. Behrens"