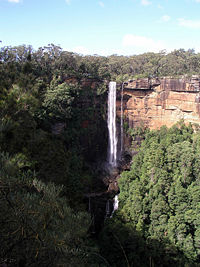 Morton National Park is a national park in New South Wales, Australia. It encompasses 60,000 acres. According to the National Parks website, a reserve was established in the area near Bundanoon in 1824 and there were additional land additions over time. The area was designated a National Park, in 1938,largely through the efforts of Mark Morton MLA; with the final additions in 1970.[1] Access is not as extensive nor are there as many attractions as in large parks in the United States, for example, but the natural beauty is spectacular and includes Fitzroy Falls, where there is an award-winning visitor’s centre and the lookouts at Tallong. Towns and hamlets that border the park include Bundanoon (one can walk to the park from the Bundanoon Railway Station; one must drive or take a bus from most others), Fitzroy Falls, Nowra, Tallong and Ulladulla.

Unlike some national parks in other countries, sections of Morton National Park are closed to the public.

The park is a sanctuary for many Australian animal species, including wombats, possums, gliders and the ubiquitous kangaroo, but the protected flora is also noteworthy.