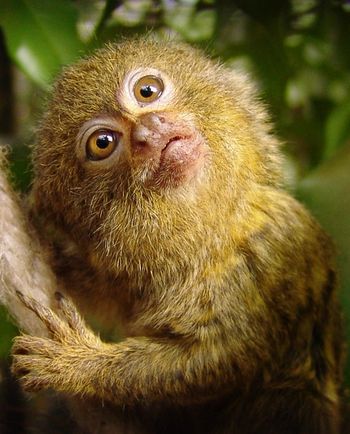 (CC) Photo: Joachim S. Müller
The pygmy marmoset of South America is the world's smallest true monkey, generally up to about six inches (15 centimetres) long excluding the tail, which is can be up to 7.9 inches (20 centimetres).

Monkeys are a group of primates found in both the "New" and the "Old" World. The term "monkey" is actually a laypersons term for any one of the generally small-bodied and often distantly related primates that do not fall into the classification of prosimians or the generally larger bodied apes and humans. There are two basic types of monkeys - platyrrhines and catarrhines.[1][2] South American monkeys are known as platyrrhines and differ substantially from the catarrhines monkeys, having evolved largely in isolation.[1][2]

The name platyrrhine is derived as a descriptive term of the monkeys' faces, since South American monkeys have broad, flat noses. All platyrrhine monkeys are small - the largest is only around 10kg.[1] They also exhibit many primitive dental and skeletal features including having three pre-molars in each side of their mandible and maxilla - thus they have a total of twelve premolars.[2]