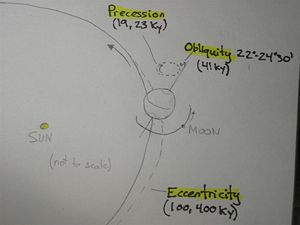 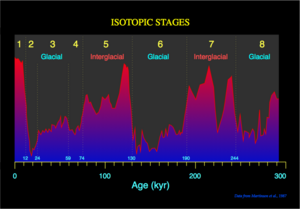 Milankovitch cycles are cycles in the Earth's orbit that effect the amount of solar radiation striking the Earth at different times of the year. They are named after Milutin Milanković a Serbian engineer. These cycles include the precession, eccentricity, and obliquity of Earth's motions. All three processes occurring simultaneously produce several ice age cycles, each specific to a orbital force. The 100,000 year cycle of ice ages are the dominant numbers. The cycles result with changes in high latitude insolation, which is the measurement of solar radiation absorbed on the surface area in an amount of time, expressed as W/m^2 or kilowatt-hours per square meter per day. Depending on the albedo of the surface area will determine how much light is reflected or absorbed (snow has a very high albedo (.8-.9 on a 0-1 scale). The solar radiation would lead to deglaciation, Earth's overall albedo will plummet exponentially as the ice melts and more energy is absorbed. The Milankovich cycles cause the start of initial warming. "It is concluded that changes in the earth's orbital geometry is the fundamental cause of the succession of quaternary ice ages." [1] This theory opens up a wide field of stratigraphic and sedimentology research.

This is Earth's wobble caused by our daily rotation while orbiting the Sun. The Greek astronomer Hipparchus discovered the equinoxes were not static, but move West on the ecliptic when compared to distant stars that relatively seem fixed at this distance. He lived some 100-200 years BC. The variation in the timing of the equinoxes is another definition for precession. Precession is the same physics as a top's wobble: the Earth's axis will have a change in the direction. Currently it points towards the star Polaris, but after 25,765 years (a Platonic year) our axis will have made a complete circle. Northern hemisphere winters will gradually become longer as Summers become shorter during the next 10,000 years. The winter will be warmer as well, hotter air will be able to hold more moisture, and subsequently produce a greater amount of snowfall. At approximately 12,882.5 years our North will be 180 degrees away from where it points now, essentially South from the current perspective. The study of paleomagnetism has demonstrated that the Earth's magnetic field varies in both orientation and intensity through time. The positions of magnetic North and magnetic South become interchanged. "Evidence from high-sedimentation-rate South Atlantic deep-sea cores indicates that global and Southern ocean carbon budget shifts preceded thermohaline circulation changes during the last ice age initiation and termination and that these were preceded by ice-sheet growth and retreat, respectively." [2] Magnetochronology is the study of geomagnetic reversals. When you make an observation of the direction of the geometric field, to calculate the pole position, this is done from only one location, then it is called a VGP. Ten or more site-mean VGPs should be used to calculate a paleomagnetic pole, this number would provide a reasonable average.[3] "The last swing of the VGP (virtual geomagnetic pole) from the southern hemisphere to the northern hemisphere in the Brunhes-Matuyama geomagnetic reversal." [4] Ocean sediments are used for chronostratigraphy as well. This is time related to layers of rock, in this case ocean sediments. Global climate has been monitored and recorded covering the past 450,000 years from the Southern hemisphere ocean-floor sediments. The oxygen isotopes from the rocks can be analyzed and correlated to the present temperature of Earth. Within the climatic variance of these records over 450,000 years there is a concentration of three spectral peaks recurring in periods of 23,000, 42,000, and approximately 100,000 years. According to J. D. Hays, the 23,000-year portion of the variance on the 450,000 year record displays the same periods (about 23,000 and 19,000 years) as the quasi-periodic precession index. Differential gravity is acting on Earth at all times. The Sun, moon, and other planets in our solar system all have a force of attraction. The equilateral bulge is proof of this, along with the precession of Earth's rotating axis.

This is the measure of how much the orbit shape deviates from a circle to an ellipse. The eccentricity of the Earth's orbit is currently about 0.0167 . A circular orbit would be measured as e=0 so earth is not far from a circle being only .016 more eccentric. The primary periodicity is approximately 100,000 years, ranging between one and five percent over time.[5] This range (0 to .05) results from gravitational attractions from the planets in our solar system. The current effect this has on solar radiation is only .2% although this is very significant in the expansion and retraction of the polar ice caps. Also in the next 10,000 years temperatures will begin to rise in both hemispheres getting closer to the mid-interglacial peak, as the eccentricity of Earth's orbit will be almost halved, reducing the mean orbital radius.

This is earth's axial tilt. The periodic cycle has a range from 21.6 and 24.5 degrees, Earth's axis has a 23.44 degree tilt, pointing towards Polaris. It is in the decreasing portion of this phase. For the year 1980, the North geomagnetic pole was located at approximately 79°N, 289°E in the Canadian Arctic Islands. If Earth's axis was perpendicular to it's orbit, there wouldn't be any precession or seasons for that matter. Many believe our seasons are caused by the location of Earth in it's orbit around the Sun. It is the angle of the hemispheres surface that determines the percentage of direct sunlight. The obliquity is simultaneously responsible for the long dark periods and never setting Sun Summers at the poles. Eccentricity modulates the precessional signal as well. With variation in these two factors we see a fifteen percent change in the amount of radiation at high latitudes, and the cause of 42,000-year peaks of climatic change on the 450,000 year records. This amount of time (42,000) is the same period of variations in the obliquity. Sunlight alteration of this magnitude influence the growth and melting of ice sheets. Hence the waxing and wanning of large scale ice sheets. 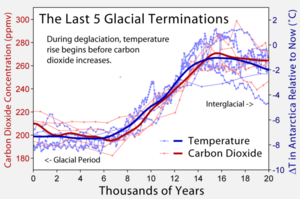 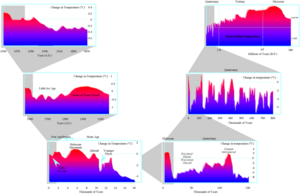 It wasn't until the 1800's that glacial-interglacial theories were talked about. Broecker and Van Donk's data on these orbital forces obtained during the 1970's was the evidence Milankovitch needed in 1920. The development of ice sheets is dependent on the amount of solar radiation reaching the Earth's surface. The variation of earth's orbit is credited to these cycles. Ice age periods are dynamic because each orbital force is dynamic. Each cycle is the cause for a peak every 23,000, 42,000, and approximately 100,000 years in records. The aphelion and perihelion change position on the orbit through a cycle of 360 degrees. The aphelion is the point in orbit where Earth is farthest from the sun, this is opposite of the perihelion when Earth is nearest to the Sun in it's orbit. The cycle has two periods of approximately 19,000 and 23,000 years. Together these combine to produce a typical cycle of about 22,000 years.

Milankovitch cycles are theory and other people have argued against them. Richard Muller is quoted: "We have been studying the cycles of the ice ages using data collected from sea-floor cores, Greenland ice, and other terrestrial sources. We have published a careful spectral analysis that shows that the "standard" Milankovitch theory for the glacial cycles is wrong, and we have proposed an alternative explanation: that the cycles are driven by extraterrestrial accretion."[6]