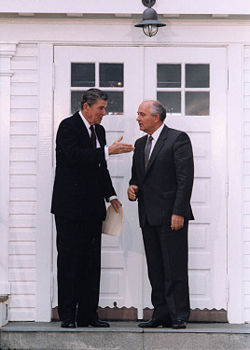 Mikhail Sergeyevich Gorbachev (Михаил Сергеевич Горбачёв, born March 2, 1931) became Secretary General of the Communist Party of the Soviet Union on March 11, 1985 and the de facto leader of the USSR. His rise to leadership is generally seen as the beginning of the end of the Soviet empire in 1991.

When Gorbachev was appointed, he was the youngest member of the Politburo and succeeded Konstantin Chernenko (1911–1985), who had died of emphysema on March 10th, the day before Gorbachev's appointment. Gorbachev is best known for his policy of perestroika (reform) and glasnost (transparency). His attempts to reform the Communist Party led to the end of the Cold War—for which he received the Nobel Peace Prize of 1990—and to the end of the omnipotence of the Communist Parties in the Soviet Republics. This, in turn, caused the dissolution of the Union of Socialist Soviet Republics in 1991, the same year that Gorbachev stepped down from his position of power.

Currently, Gorbachev is the leader of the Union of Social Democrats, a Russian democratic-socialist political party. He also heads the International Foundation for Socio-Economic and Political Studies (or "Gorbachev Foundation"), which is both a think tank and a medical charitable organization; and the environmentalist organization Green Cross International.