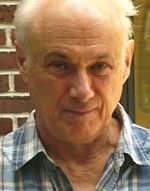 Michael Zinn Lewin (born 1942, Springfield, Massachusetts) is an American writer of mystery fiction primarily known for his series about Albert Samson, a distinctly low-keyed, non-hardboiled private detective who plies his trade from a modest walk-up apartment in Indianapolis, Indiana. Lewin himself grew up in Indianapolis, but after graduating from Harvard and living for a few years in New York City, has lived in England for the last 40 years. Most of his fiction, however, continues to be set in Indianapolis, including a secondary series about Leroy Powder, a policeman who frequently appears in the Samson novels, generally in a semi-confrontational manner. He is the son of Leonard C. Lewin, author of the 1967 bestselling satire The Report from Iron Mountain: On the Possibility and Desirability of Peace. 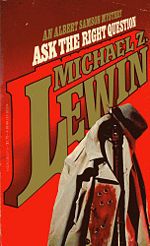 Cover of the 1979 paperback edition of the first Albert Samson novel.

The Samson stories are told in the breezy first-person narrative form typical of private-eye novels and are witty and somewhat off-beat, both for their plotting and their somewhat unusual setting, as well as for the sharply drawn relationships that Samson has with his mother, who owns a diner, and with his long-time but nameless girlfriend, whom he refers to only as "my woman". He eschews whiskey and chasing women in the manner characteristic of his fictional confrères, does not own a gun, makes modest, non-gourmet meals for himself from cans, and shoots hoops as a recreation. Although the stories start off in modest, understated fashion about seemingly trivial domestic matters, they eventually escalate to scenes of startling violence. Of major importance in the stories is the locale itself, the city of Indianapolis and its surrounding countryside, and Samson is certainly one of the most important of the regional detectives in mystery fiction, as well as being one of the very first to appear in what is now a widespread genre.

The New York Times gave a favorable review to the first Samson adventure:

It is always pleasant to come across a promising talent, and Michael Z. Lewin is one. His first book, Ask the Right Question, is a smoothly written private-eye story. Locale, Indianapolis. A teenage girl hires a detective to discover her biological (i.e. real) father.

He starts investigating, and naturally bugs crawl out of the woodwork.

Albert Samson, the not-too-successful private eye, may over-indulge in self-pity—but he understands people and is basically honest with himself and others. Characters are finely drawn, plotting is logical, details are well worked out. You can be sure that we'll be seeing more of Mr. Samson.[1]

It was also one of the five nominees for the Mystery Writers of America annual Edgar prize for the Best First Novel by An American Writer awarded in 1972 for books published in 1971.[2]

Twenty years later, with the publication of the seventh Samson book, Called by a Panther, about the detective's calamitous involvement with a gang of inept ecological terrorists, the Times wrote:

The waggish author takes an irreverent view of his wholesome hero, who has been attracting wacky clients ever since he began advertising his services on a local cable television station. It seems he projects "an amateurish professionalism that is completely irresistible" to Indy's oddies. To do justice to his mercurial characters, Mr. Lewin skimps on procedures and dawdles over the mystery's simple resolution. But he is an amusing writer and an ironic commentator on the current state of Midwestern bizarre. [3]

Many of the Samson books have endings that, while satisfyingly logical, are something less than unalloyed triumphs for the hero; the conclusion of Called by a Panther, however, is downbeat to the point of grimness.

Books that take place in Indiana

Non-series OUTSIDE IN 1980 Knopf