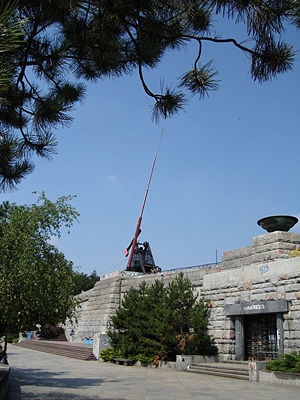 (CC) Photo: Louise Valmoria
Metronome from the base of the statue.

The Metronome on Letna Hill is a large reverse pendulum, in Prague, the Czech Republic, built on Letna Hill 1991 by artist David Černý for a national fair. It marks the position upon which the largest statue of Josef Stalin leading a pack of peasants and workers once stood (and removed in 1962).

The length of the metronome is 15.5 metres, the height of the original statue, and at its base lies the remnants of the statue's original foundations. The pedestal itself is still referred to by locals as Stalinův pomník (Stalin's Monument), although it is more commonly known to foreign tourists and in guidebooks as the Metronome.

The metronome is visible from vantage points across Prague looking towards the castle precinct, which gives an indication of the dominance of the site's previous occupant.

The underground chambers at the base of the podium have remained empty for years, and as discussion continues today as to development of the Letna precinct there are also debates as to whether or not the metronome should remain or be replaced.