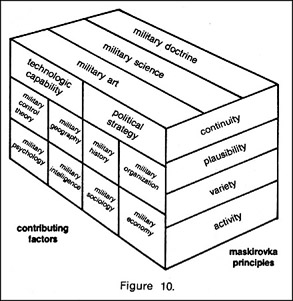 maskirovka operates at many levels

Maskirovka (literal translation: masking, camouflage) is a term of art in Soviet and Russian military thought, which includes Western military concepts of deception, but goes well beyond. Their usage include deception, counterintelligence and concealment, as an integral part of all planning, in which the highest levels of command are involved.[1] Much of what the West considers information operations is part of this discipline. Depending on the scale of the activities, maskirovka can be strategic, operative and tactical.[2]

Bacon wrote "The Battle of Kursk was also an example of effective Soviet strategic and operative maskirovka. While the Germans were preparing for their Kursk offensive, the Soviets created a story that they intended to conduct only defensive operations at Kursk. The reality was the Soviets planned a large counteroffensive at Kursk once they blunted the German attack. .... German intelligence for the Russian Front assumed the Soviets would conduct only “local” attacks around Kursk to “gain a better jumping off place for the winter offensive." The counterattack by the Steppe Front stunned the Germans.[3]

The opponent may try to overload the analytical capability.[4] As a warning to those preparing the intelligence budget, and to those agencies where the fast track to promotion is in collection, one's own side may produce so much raw data that the analyst is overwhelmed, even without enemy assistance.