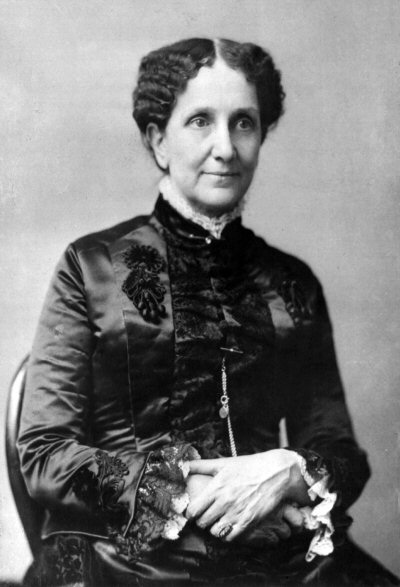 Mary Baker Eddy (July 16, 1821 – December 3, 1910) was the founder of the Christian Science movement, The First Church of Christ, Scientist, in Boston, Massachusetts, an international newspaper The Christian Science Monitor[2], and several religious magazines still in circulation today. She was also an author, teacher, speaker, and healer, whose chief work, the book Science and Health with Key to the Scriptures,[3] was included by the Women’s National Book Association on its list of "75 Books By Women Whose Words Have Changed the World.“[1] While the first edition of Science and Health gained limited notice, a decade later Eddy, and the orthodox-challenging form of Christianity she promoted, had gained notoriety in Boston where her teaching drew adherents from male-dominated orthodox churches, many of whose pastors lashed out in response. Though poor and infirm during the years leading up to a pivotal experience of spiritual healing in 1866 that was instrumental in launching her efforts to establish a new Christian denomination, by the end of her life, she had become wealthy and a property owner, and was one of the most famous, controversial and powerful women of her time. More than two dozen biographies have been written about her life, beginning in 1907 (three years before her death).[4] A 2021 book, A New Christian Identity: Christian Science Origins and Experience in American Culture by Amy B. Voorhees is at once a biography of Mary Baker Eddy, a textual and historical study of the evolution of Science and Health, and a social history of the beginnings of the Christian Science movement.[5]

Perhaps the most significant feature of Mary Baker Eddy's childhood, given where her life would eventually go, was the thoroughly Christian atmosphere she breathed in a household of devout Congregationalists and which engendered her lifelong love of the Holy Bible.[6] She traveled with her first husband from New Hampshire to North Carolina, and when he died she was left with no money and six months pregnant. She managed to make the 1400-mile journey back to family in time for the birth, where she lived with her parents. After her mother’s death and her father’s remarriage, she was forced, due to her poor health, to have her young son live with a family friend, who later married and moved with the boy to Minnesota. She married for a second time, at least in part out of hope to provide a home for her son, but Daniel Patterson ended up forbidding it. He eventually deserted his wife, and she successfully sued for divorce. She later married a third time, a happy union lasting only five years until the death of her husband, Asa Gilbert Eddy in 1882.

Following years of chronic ill health and efforts to regain it through a variety of curative methods of the day, at the mid-point of her life, she experienced instantaneous cure when, turning to a healing account of Jesus in her Bible, she was “filled with the conviction that her life was in God.” [7] She was healed not only of the aftereffects of a serious accident that occurred a few days before, but found lasting relief from her other chronic ailments. With newfound health and deeper delving into Bible study, she became a healer, teacher, influential author, and leader of a rapidly growing new Christian denomination and church. In time she would accumulate personal wealth and found a newspaper, The Christian Science Monitor, that over the next century would win seven Pulitzer prizes. She bought land at a time when very few women had rights to land or house ownership. In her old age, she fought off a large-scale attempt by others to declare her incompetent and seize control of the church and her personal estate.

Science and Health with Key to the Scriptures

Mary Baker Eddy first self-published Science and Health in 1875, and continued revising it for more than three decades until closely before her death. Many sources overlook the importance of this book in its finalized form in 1910. It is well known as the foundational guidance for the Church of Christ, Scientist, but it is far more than that. It is a work of deep religious and philosophical significance. Although never a seminary student, her life experience and lively intelligence led Eddy to grapple with the problem of theodicy, and through Christian Science, to arrive at a logical, if broadly disputed, resolution to the gordian knot that has bedeviled theologians across centuries: “If God and evil both exist in the same sense of the term, what alternative remains but to bargain away either divine sovereignty or divine goodness to resolve the dilemma of God’s presumed coexistence with unspeakably great evil on a mammoth scale?”[8]

The Christian Science answer to the problem of theodicy is that because God is all good and is the sovereign source of all reality, evil must be uncreated by God and therefore can have no absolute reality, no place in God’s entirely spiritual creation. In Science and Health Eddy raises provocative questions: “Does divine Love commit a fraud on humanity by making man inclined to sin, and then punishing him for it? Would anyone call it wise and good to create the primitive, and then punish its derivative? ... In common justice, we must admit that God will not punish man for doing what He created man capable of doing, and knew from the outset that man would do. God is ‘of purer eyes than to behold evil.’”[9]

Stephen Gottschalk’s article, “Theodicy After Auschwitz and the Reality of God,” in Union Seminary Quarterly Review includes these observations:

Critics of Christian Science have often pointed out that Eddy’s approach to the problem of evil does not deal with the question of how the very illusion of evil could be possible in a universe created by God…. If Eddy looked for any explanation of the origin of evil at all, it was in the limitation of the human mind and, accordingly, in a broadening of the Christian concept of sin. If one grants that humanity is “fallen” and in sin (a proposition quite congruent with her theology as far as human beings are concerned) then it is natural to assume that the human perceptual faculties are fallen as well. In this “fallen” state, we are simply unable to discern creation as God intends it. What human beings “see” is therefore only what their own perceptual limits enable them to see. This does not deny the reality of the universe of daily experience, but it does mean that materiality and destructiveness are not inherently in God’s creation. Rather, the sinful error of life apart from God operates through the presumed authority of “natural” law and material perception, blinding humanity to the supreme reality of God’s Kingdom, which is spiritually present to be brought to light. So hypnotic is this basic error of mortal or carnal mindedness that it required the revelatory breakthrough of Jesus’ life to make possible humanity’s recognition of the encompassing spiritual reality to which conventional perception remains blind. Eddy saw his life as a unique revelatory incursion into the perceptual limits of human experience of an authentic spiritual existence which defines the true being of all men and women as the sons and daughters of God. [10]

Here was a woman whose long life ended a decade before women had gained the right to vote and who managed to stir up questions about issues that so many male religious leaders and thinkers believed they had settled. In writing about the first edition of Science and Health, feminist scholar and biographer Gillian Gill homes in on this exact point:[11]

"The real issue is the author's audacity, her daring to think that a woman like her, with her resources, could write, not the expected textbook on mental healing techniques, not the comfortable compendium of healing anecdotes, but a book that takes on the great questions of God and man, good and evil, and that rejects orthodox verities."

The MARY BAKER EDDY Library[12] provides a timeline for more than thirty attempted biographies of Mary Baker Eddy. Two of these stand out as particularly worth attention.

From 1909, The Life of Mary Baker Eddy and the History of Christian Science[13] by Georgine Milmine was created by aggregating a series of exposé articles published 1907 to 1909 in McClure's Magazine. According to Gillian Gill's extensive investigation of the Milmine work as background for her own 1998 biography[14], not only is Milmine's authorship in question, but the background sources for the articles were dominated by people who had brought lawsuits against Mrs. Eddy or had previously fallen out with her, and the true authorship of the series more likely belongs with some of McClure's well known staff (which included the now famous Willa Cather).

It now appears that the avowed author of the book probably wrote little of the book which bears her name. Milmine's authorship was not challenged in print until 1993, when a letter was found implicating Willa Cather as author of parts 2-14 of the series. Cather appears not to have wanted any public association with the book, and the terms of Cather's will prevent a key letter about the matter from being published (although Gill paraphrases its contents). Ms. Gill notes the extraordinary influence of this early biography on subsequent biographies (such as Powell 1907; Dakin 1929; and Bates/Dittemore 1932)[15], despite its own source materials being lost and despite the complex mystery surrounding its authorship and the intentions and objectivity of its authors.

The promotion of this book touts it as being free from influence from the Church of Christ, Scientist (not for lack of trying), so it was, perhaps unfortunately, for a time considered to be the single trustworthy source of information on, especially, the first half of Mrs. Eddy's life. While some of the Milmine biography is neutral in tone, or even complimentary, other parts are extremely scathing. And the author was clearly targeting a female audience. The reader may be startled at several figures of speech taken from the realms of knitting and sewing.

From 1998, Mary Baker Eddy[16] by Gillian Gill provides a balanced approach. The author was granted, after some patient waiting, access to archives closely held by the First Church of Christ, Scientist in Boston.[17] This now out-of-print, 713-page tome (150+ pages of which are notes, references and appendices) is one of the more clear-eyed examinations of Mary Baker Eddy's life, and contains much useful material about the condition and expectations for women in the latter part of nineteenth-century America. Taking essentially no stand on whether or not Mary Baker Eddy possessed a special healing ability, and making no judgements about her religion, the book examines Mary Baker Eddy as a person, a woman, and later a public figure. It's one of those books where the readers may find themselves spending as much time reading the footnotes as the text itself.