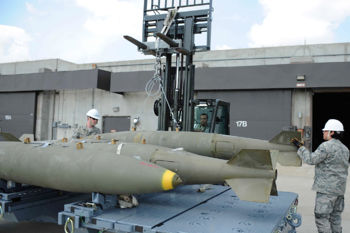 Mark 8x series of gravity bombs are a standard U.S. series, used by all U.S. military services[1], and many other nations. The basic munition is a low-drag gravity bomb (LDGB), with the minimal controls of substituting fins that maximize or minimize speed, and fuzes that mount either in the nose (e.g., for airburst or impact detonation) or tail (i.e., slight delay).

Rather than thinking of them as fixed configurations, it is most useful to consider them as modular systems, with the main Marx 8x section forming the warhead. Thus, they may be converted to guided bombs by adding alternate components. BLU- series warheads have alternative casings or fillers.

The low-drag means they have casings that are aerodynamically designed for minimum drag, so, when they are carried on the external wing mounting points of aircraft, they create the least possible wind resistance.

The "X" in Mark 8x is a code for the approximate total weight of the bomb. Roughly half of this amount is actual explosive content; the rest goes principally for the casing, fins, and fuzes. There are ballistically similar bombs, such as the BLU-109, which have much stronger cases, accepting much less explosive in order to be able to penetrate more deeply. Again, explosive fillers such as Tritonal are being replaced with PBXN-109 or other less sensitive explosives.

While the basic Mk. 8x is guided only by the accuracy of the releasing aircraft, using the modular design, most can be equipped with electro-optical guidance (e.g., GBU-15 with AN/AXQ-14 date links, home on a laser designator with PAVEWAY laser guidance, or use the Joint Direct Attack Munition (JDAM) with inertial guidance, often supplemented with Global Positioning System satellite navigation information kits, which replace or supplement the tail fins with steering surfaces, and perhaps glide wings. 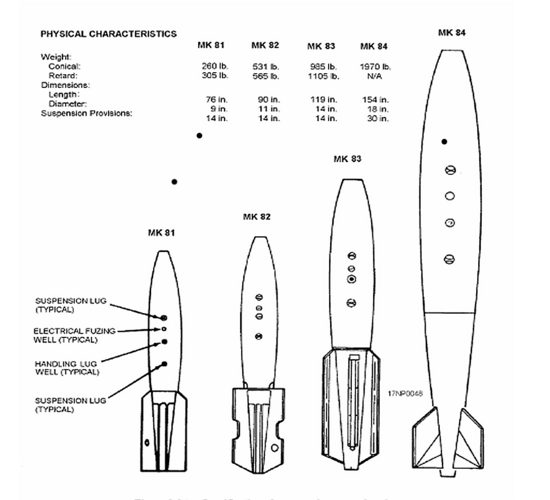 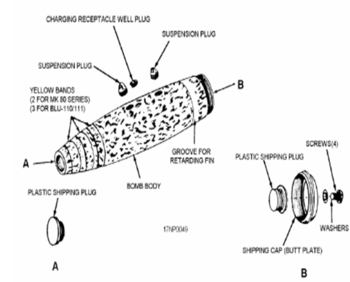 "The bomb body is designed with a nose and tail fuze well. These wells are internally threaded to receive either mechanical or electric fuzes."[2]

In both guided and unguided versions, the nose may contain part or all of a fuze intended for impact detonation, detonation after a brief delay, or, with a supplemental sensor that allows an airburst. With one of the most common fuzes, the FMU-139, only the ground proximity sensor is in the nose, and the actual electronics and detonating explosives of the fuze are in the tail.

Laser-guided bombs and bombs with electro-optical guidance need to have sensors, and usually control fins in or on the nose.

While the original filling was TNT, there is a program of replacement with PBXN-109 insensitive high explosives to improve safety in crashes or emergency jettisons. Another program uses the PBX-9502 IHE as a booster in a demonstration Mark 82 with a main charge of the IHE AFX-645. [5]

Specialized fillers may be used, such as dense inert metal explosive that concentrates the blast, minimizing damage to anything near the actual target. There has been some use of concrete fillings in the Mark 8x case with precision guidance, for even more focused damage.

Actually dropping a bomb into the airstream below the aircraft can be nontrivial, so explosive bolts or other energetic devices may actually hurl the bomb rather than simply depending on gravity.

More advanced derivatives have the MIL-STD-1760 mechanical and electrical interface that confirms, to weapons control systems on the aircraft, that the bomb has fallen away. The -1760 interface also allows the bomb to be defined as an intelligent node on the MIL-STD-1553 data bus.

Tail groups variously stabilize the free-falling bomb in high-altitude drops, or slow it for low-altitude delivery where the carrying aircraft needs to get clear of blast and fragments. Basic stabilizing fins are called conical.