This is an article about the series of video games starring Mario. For other uses of the word Mario or the term Super Mario Bros., please see Mario (disambiguation)

A formula for success

Super Mario Bros. premiered in Japan in September 1985; by the end of December, Nintendo had produced 2 million units of the game. Its phenomenal sales helped Nintendo command over 90% of the Japanese video game market. Soon afterward the company's nascent North American branch packaged Super Mario Bros. with its game consoles to test its product in New York City; the system's stunning success prompted its nationwide distribution. The NES, along with Super Mario Bros., is credited with reviving the moribund North American video game industry after the market's crash in 1983, a crash blamed on oversupply and poor quality control.

Nintendo quickly capitalized on the game's success, using its design as a template for countless sequels. Super Mario Bros. 2 was released in Japan less than a year after the original's debut; Nintendo of America employees personally disliked the game, finding it frustratingly difficult and otherwise virtually identical in gameplay to Super Mario Bros. Consequently, another Nintendo game unrelated to Mario, titled Yume Kojo: Doki Doki Panic, was modified to use sprites and music from the Mario series and rebranded as Super Mario Bros. 2 for its North American release.[1] Although the game wasn't essentially Mario, few players knew the difference, and the title, regarded only in retrospect as the black sheep of the franchise, went on to sell 10 million copies in the United States alone.

A third installment, Super Mario Bros. 3, was released in Japan in late 1988. It shipped to North America in 1990 and Europe in 1991; its shipment was preceded by the theatrical release of a film, called The Wizard, best described as a 90-minute commercial for the game. For American and European players, Super Mario Bros. 3 was a return to the style of the original but on a far grander scale, with more power-ups, more foes, more secrets, and more levels, the last of which are connected by worlds with cohesive themes: a desert world, a water world, and so on. The game was a smashing success, both critically and commercially. By 1993 the game had sold 4 million units in Japan and 7 million in the United States, earning Nintendo over US$500 million in revenue. Author David Sheff commented that, in music industry terms, the game went platinum eleven times.[2]

The series smoothly transitioned to the NES's successor, the Super Nintendo, with Super Mario World. Like the original, Super Mario World was packaged along with its platform and aptly demonstrated the console's technological capabilities. Mario hopped and bopped to a vast array of rotating and distorting colors and stereo sound; he was also partnered with a cuddly green dinosaur companion named Yoshi. Like its predecessors, Super Mario World was extremely successful, and Yoshi went on to star in Super Mario World 2: Yoshi's Island. For its clever puzzles and uniquely soft, pastel-like graphics, Yoshi's Island drew great critical acclaim, but its popularity was eclipsed by a growing interest in the three-dimensional graphics of video games for Sony's first hardware entry into the market, the PlayStation, and Nintendo's own Donkey Kong Country.

Nintendo was well aware of the market's impending adoption of 3D graphics as a de facto standard, and during Yoshi's Island's development, the company's hardware division was busy creating a new console to compete with the PlayStation, one capable of displaying three-dimensional, 64-bit graphics, that became the Nintendo 64. Parallel to the console's development, they were making another Mario game, one to launch the system off of, and one which added a third dimension to the illustrious franchise: Super Mario 64. 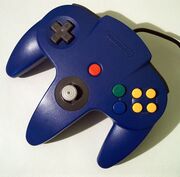 Nintendo's hardware and software divisions closely collaborated on the Nintendo 64's design, particularly its controller. The three-handled controller was, at Miyamoto's request, tweaked to perfectly suit Mario 64's gameplay. Its most notable inclusion was an analog joystick, whose primary advantage over a directional pad is the ability to detect degrees of movement.[3] Depending on how hard players push the stick in one direction, Mario will either tiptoe, walk, or run. The development team prioritized the character's movements, and before creating the levels they tested and refined Mario's animations on a simple grid ad nauseum. In awarding Edge magazine's first perfect score to Mario 64, the reviewer remarked, "the moment the game hands control of Mario over to the player, an experience of discovery begins....the temptation to simply toy with the controls without achieving anything in particular is overwhelming."[4]

In the open courtyard where Mario 64 begins, players are introduced to a second interface issue that confronted the game's developers: camera control, or perspective. 2D games are exempt from this complexity as the screen moves along only one or two axes, and before Mario 64, 3D games circumvented the problem by using fixed (Resident Evil) or first-person (Doom) perspectives. These arrangements, however, suited neither the game's large, open worlds nor its fast-paced, run-and-jump style of play. Miyamoto's team labored to create an accommodating camera, optimizing the viewing angle for each area yet allowing for complete user control. However, maneuvering a video game character in 3D space presents an inherent challenge. One writer pointed out that "the third dimension makes jumps much harder to estimate; players might need to study the situation from several angles to properly aim and time a difficult leap."[5] To balance the difficulty, Mario was given an arsenal of acrobatics that would make an Olympic gymnast blush, and a generously sized "health meter" (a symbolic representation of how much damage a character can withstand) replaced the less forgiving rules of the game's predecessors.

The added dimension necessarily altered not only the series's mechanics, but also its formula. Fully three-dimensional planes are non-linear by definition; thus, it is more difficult to define an end in 3D games than in side-scrolling games. The goal in Mario 64 was no longer simply to reach the end of a level; levels instead became settings for multiple objectives whose common goal is the acquisition of "power stars." Objective-based game design naturally involves more exploration and puzzles, so time limits—a series staple—were removed.

Mario 64's release—and, by extension, the Nintendo 64's launch—was delayed twice because Miyamoto wanted to further tweak his magnum opus. But the delay was apparently vindicated: Mario 64 was as revolutionary for 3D game design as the original was for 2D game design. Where early PlayStation games merely dabbled in 3D, Mario 64 "basically set the standards for how 3D space would be navigated within video games."[6] As the flagship launch title for the Nintendo 64, Nintendo banked on Mario 64 to sell its new box, and their hopes were rewarded as the game went on to sell eleven million copies.

But, in some ways, Mario 64's success is paradoxical: Three alleged reasons for the Nintendo 64's failure—its delay to market, its controller's nonstandard design, and its cartridge media format—can be attributed to Mario 64's creation. Nintendo sought to correct these mistakes with their next system, the GameCube, but their efforts came up short as the system finished behind Microsoft's XBox and Sony's PlayStation 2 in the so-called console wars. The platform's companion Mario title, Super Mario Sunshine, was widely believed to be a disappointment, and the game sold only half that of Mario 64.

Nintendo's journey to regain market leadership began with their handheld DS system, whose sales have been both driven and partly sustained by New Super Mario Bros., and continued with the unconventional Wii, host platform of Super Mario Galaxy. Mario Galaxy was touted by Nintendo of America president Reggie Fils-Aime as the true successor to Mario 64, implicit but official acknowledgment that Mario Sunshine failed to meet the series's high standards.[7] Fils-Aime's extolment was warranted: By measure of review aggregates, Mario Galaxy is the third-best critically received game of all time.

New Super Mario Bros. Wii's 2009 release was accompanied by no fewer than five other Mario titles. The franchise is so immense and diverse that it is easy to get lost in its many sequels, spin-offs, and derivatives. Most of these titles are outsourced to smaller, less talented game developers, earning Nintendo a reputation for milking its mascot. Nintendo is demonstrably indifferent to their acquisition of said reputation: The series's derivative titles increase in number yearly and include Dr. Mario, Super Mario Kart, multiple series of role-paying games (Super Mario RPG, Paper Mario, and Mario & Luigi Superstar Saga), a long line of Mario sports games (including golf, tennis, soccer, baseball, basketball), and Mario Party. Mario has filled in countless roles since his carpentering and plumbing days, practically fulfilling Miyamoto's original intention for a Jack-of-all-trades character and underscoring both the brand power of the franchise and its continued importance to Nintendo's success.