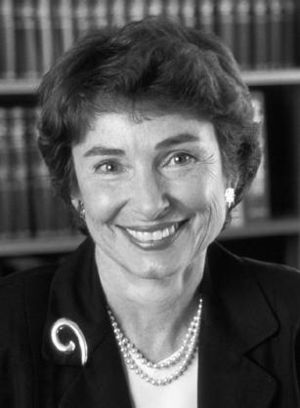 Marcia Angell, M.D. (born 1939) is an American physician, author, and the first woman to serve as editor-in-chief of the New England Journal of Medicine (NEJM). She currently is a Senior Lecturer in the Department of Social Medicine at Harvard Medical School, in Cambridge, Massachusetts.[1]

After completing undergraduate studies in chemistry and mathematics at James Madison University in Harrisonburg, Virginia, Angell spent a year as a Fulbright Scholar studying microbiology in Frankfurt, Germany. After receiving her M.D. from Boston University School of Medicine in 1967, Angell trained in both internal medicine and anatomic pathology and is a board-certified pathologist. She joined the editorial staff of NEJM in 1979, and became executive editor in 1988 and interim editor-in-chief from 1999 until June 2000.[2] [3]

Angell is a frequent contributor to both medical journals and the popular media on a wide range of topics, particularly medical ethics, health policy, Evidence-based medicine, the interface of medicine and the law, and end-of-life healthcare. Her book, Science on Trial: The Clash of Medical Evidence and the Law in the Breast Implant Case (1996) received critical acclaim. With Dr. Stanley Robbins and, later, Dr. Vinay Kumar, she coauthored the first three editions of the textbook Basic Pathology. She has written chapters in several books dealing with ethical issues in medicine and healthcare. In 2004, she published The Truth About the Drug Companies: How They Deceive Us and What to Do About It.[4] Angell is a member of the Association of American Physicians, the Institute of Medicine of the National Academy of Sciences, the Alpha Omega Alpha National Honor Medical Society, and is a Master of the American College of Physicians. She is also a fellow of the Committee for the Scientific Investigation of Claims of the Paranormal and is an outspoken critic of medical quackery and the promotion of alternative medicine.

In 1999, Jerome P. Kassirer, M.D., resigned as NEJM's editor-in-chief over a management dispute with the Massachusetts Medical Society, the journal's publisher. NEJM is the oldest, continuously published medical journal in the world.[1] The dispute was over the Society's plan to use the journal's name to brand and market other sources of healthcare information. Kassier and Angell were opposed to the plan, because they feared it would lend unearned credibility to health information that has not gone through rigorous peer-review implied by the NEJM label.[5] Angell agreed to serve as interim editor-in-chief until a new editor could be found. She retired from the journal in June 2000 and was replaced by Jeffrey Drazen, M.D. Angell is the only woman to have served as editor-in-chief of the journal since it was founded in 1812.

Although a high-ranking insider of the American medical establishment, Marcia Angell has long spoken frankly of its unhealthy shortcomings. The American healthcare system is in serious crisis, she acknowledged in a PBS special: "If we had set out to design the worst system that we could imagine, we couldn't have imagined one as bad as we have."[6] In the PBS interview, she urges the nation to scrap its failing healthcare system and start over:

Marcia Angell is also a critic of the growing acceptance of alternative medicine. In a 1998 NEJM editorial she wrote with Jerome Kassirer, they argued:

In 1997, Time magazine named Marcia Angell one of the 25 most influential Americans.[8]