This article is about Marbles. For other uses of the term Marble, please see Marble (disambiguation). 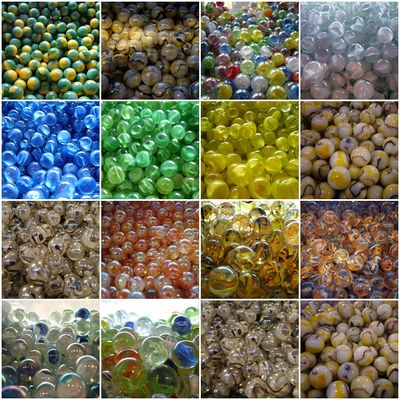 Marbles are small, smooth balls of glass, often tinted or multi-colored. They are useful as toys, ornaments, and collectables. Marbles may vary in size but are typically 1.5cm in diameter or smaller (down to around 1 cm in diameter). 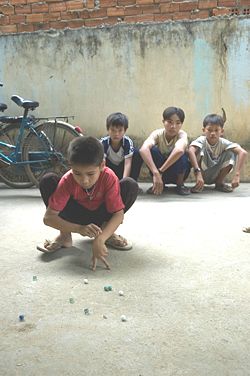 There are various games and varieties of games played using marbles (To play marbles; to shoot marbles). The marble is flicked by the thumb from within the clenched fist of the player. Games usually revolve around strength and accuracy of this flick. A simpler technique, used by less experienced players, is to hold the marble between the thumb and forefinger and shoot it overhand at the target.

Another game using just one marble per player is similar to the game tig-tag crossed with golf. The players must flick their marbles into a specified location, known as the pot. Players take turns to flick their marbles. Once a player has got his or her marble into the pot, they must then try to hit the other players marble with their own. The first player to both enter the pot then hit the opponents marble wins the game.

Games of marbles often include a form of gambling. Typically the winner of the game will get to keep the marbles they knocked out. Successful players will amass a large collection of marbles. 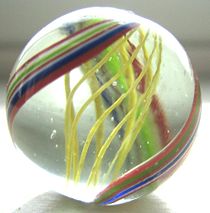 (PD) Photo: U.S. Nat Parks Service
A variety of handmade clay marbles, produced between the mid-1700s and the 1930s.

Linguistic studies have been conducted surrounding the unique terminology that has developed around marble playing, both anciently and in modern times in varied cultures.[1] In modern English vernacular, marbles have taken on various figurative meanings. To "lose one's marbles" means to lose one's mind, go insane. To "pick up/take one's marbles and go home" means to leave abruptly as in disgust or in a fit of pique.
Retrieved from "https://en.citizendium.org/wiki?title=Marbles&oldid=100875682"
Categories:
Hidden categories: